When No One is Watching by Alyssa Cole 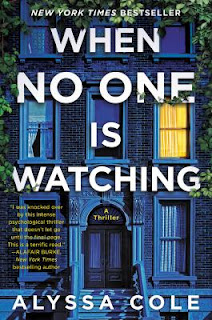 When No One is Watching is Alyssa Cole’s “genre debut.”  Typically a romance writer, Cole branches out with this 2020 gentrification thriller, and is, in my opinion, pretty successful. Although I do enjoy romance novels, this is the first book I’ve read by Cole. She lets a little of her background seep into the story with a cute romance between the leads.

Sydney Green loves her Brooklyn neighborhood where she was born and raised. But slowly, she has noticed the changes. Her longtime, beloved neighbors are leaving without so much as a goodbye. The new faces in the neighborhood have a few things in common: they’re white and rich and condescending. They also don’t seem to have any interest in getting to know the people who have lived in the neighborhood for decades. However, one new neighbor, Theo, does take an interest. He even shows up to a block party planning committee, much to everyone’s suspicion and surprise. He and Sydney are thrown together in creating a historical walking tour for the neighborhood. But digging deep into the history leaves Sydney feeling paranoid about strange current events. Fortunately, Theo doesn’t write off her fears but believes her, and vows to help her uncover what is really going on.

Though the subject matter is definitely heavy at times, I quite enjoyed this thriller. I don’t know that the romance is totally necessary but it does help alleviate some of the weight, and I can see why Cole’s romance books are so popular. I wasn’t complaining! There are also some funny bits thrown in as well. Sydney and Theo want to interview long-time residents for their walking tour. Sydney suggests they come up with a code word for when he’s being “too white” during said interviews. She settles on “Howdy Doody.”

The real meat of the story, though, is how damaging gentrification can be to black and brown neighborhoods. The villains aren’t subtle at all but that didn’t bother me too much. I listened to this on audio book, which had dual narrators. I liked it but I did struggle with the female narrator who sometimes did not differentiate enough between female characters, which made it difficult to follow. Overall, it’s a different kind of thriller that I think is definitely worth a read.

Email ThisBlogThis!Share to TwitterShare to FacebookShare to Pinterest
Labels: Alyssa Cole, audio book, Brooklyn, Christy, gentrification, thriller, When No One Is Watching