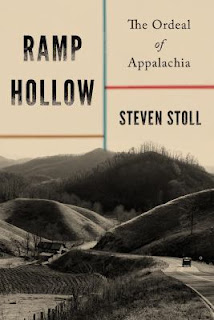 Nevermore began with another look into the local region with Ramp Hollow: The Ordeal of Appalachia by Steven Stoll.  From the early European settlers to the industrialization that razed mountaintops and eventually left miners out of work, Appalachia has been a hard-fought place with beauty and resources coveted by many.  Our reader found this to be a very scholarly work with many notes and bibliographic resources.  The perspective Stoll provides in order to look back at those earliest settlers lives was found to be invaluable. 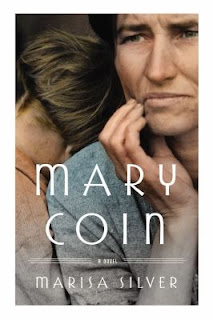 Mary Coin by Marisa Silver is a novel based around the famous photograph Migrant Mother taken by Dorothea Lange in 1936.  Silver has taken the concept of that photograph and re-imagined that mother’s story.  Within the bounds of poverty and motherhood, the character Mary Coin has a heartbreaking story.  The fictional photographer Vera Dare has a part in her tale, as well as a professor of cultural history as he explores the secrets in Mary’s life decades later.  Our reader was touched by this book and recommended it to others. 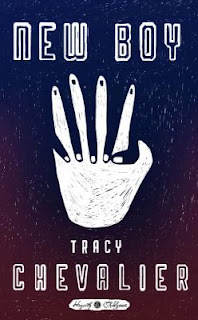 New Boy by Tracy Chevalier takes a Shakespearean tragedy, Othello, and brings it new life with racist undertones in a suburban Washington school in the 1970s.  Describing the middle school drama of four 11-year-olds, romance and betrayal is the name of the game.  Our reader noted that the book shows how all the different personalities affect each other, and that sophisticated maneuvers on the part of unsophisticated characters can really derail someone’s life.

The same reader turned to non-fiction with the Blooding: The True Story of the Narborough Village Murders by Joseph Wambaugh.  First published in 1989, Wambaugh’s tale describes the first time DNA was used successfully to solve a murder.  Teenager Lynda Mann was brutally attacked and killed near the English village of Narborough.  A lengthy manhunt ensued, with DNA identification being used to ultimately catch the killer. 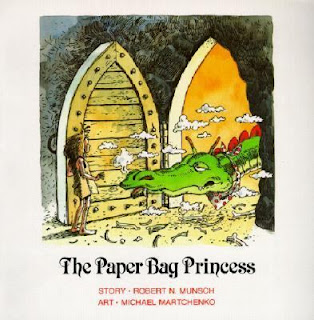 Another reader ventured into a children’s book with an attitude:  The Paper Bag Princess by Robert Munsch.  The story has a stereotypical premise:  beautiful Princess Elizabeth is going to marry Prince Ronald.  Unfortunately, a dragon smashes her castle, burns up her clothing, and carries away the Prince.  Being a resourceful young Princess, she makes a new outfit out of a paper bag and sets off to rescue the Prince.  Being quite the clever Princess, Elizabeth outwits the dragon and neatly puts Ronald in his place as well.  Our reader was charmed by the text and illustrations of this classic picture book.
Posted by BPL Ref at 9:06 AM No comments: 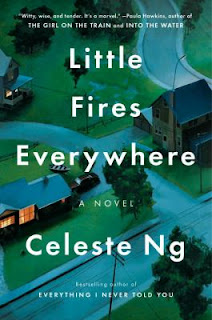 Secrets lie beneath the peaceful orderliness of Shaker Heights, Ohio, a planned community where there is a right way to do everything.  Of course that means there are wrong ways to do things, but those ways just aren’t tolerated.  Houses are built in certain styles, painted in certain colors; roads are curved just so, and nothing so unattractive as a trash can would ever grace the curbs of the community.  The schools are excellent and all children are expected to perform to the best of their ability.

Little Fires Everywhere begins with Elena Richardson (well-ordered wife and mother of four) calmly standing outside in her pale blue bathrobe watching her house burn to the ground.  Mrs. Richardson knew that her husband had gone into his law office for his usual Saturday morning catch-up, Lexie had spent the night with Serena, Trip was probably playing basketball at the community center, Moody was off somewhere on his bike, and Izzy, well, Izzy was surely responsible for the flames rising from their six bedroom home, so she was safe somewhere, anywhere else but here.

Mia Warren and her fifteen year old daughter Pearl were new to Shaker Heights the previous summer.  Mia is an artist, and seemed deserving of a hand up, so Mrs. Richardson rented them the upper level of a duplex that she owns, at a very reasonable rate, of course.  The Richardson children are all fascinated by Pearl and Mia—their transient lifestyle, their ability to load everything they own into a Volkswagen Beetle, their creative spirits which don’t quite seem to follow the rules set down by the founders of Shaker Heights.  First Moody, then Lexie, Trip and Izzy become friends with Pearl, then Mia.

As relationships develop, author Celeste Ng unfurls the complex strands of the story centered around these two families.  Just when the reader thinks that the connections are becoming clear, another twist appears taking the storyline in another direction.  These maneuverings are done smoothly and believably, subtly showing Ng’s skill.

While the teenagers are having their coming-of-age moments, cracks appear in their picture perfect community as secrets are unearthed and families changed forever.  As little fires begin to burn, the scorching brings destruction, but also change and rebirth.

Celeste Ng is also the author of Everything I Never Told You.
Posted by BPL Ref at 10:03 AM No comments: 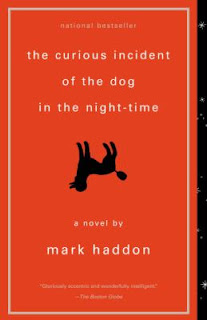 Fifteen year old Christopher likes to go out walking at night when he can look up at the stars and pretend that he’s the only person in the world, because Christopher doesn’t really like people.  Most are a mystery to him with unreadable expressions and erratic behavior.  This upsets Christopher. He likes things to be orderly, like numbers, and behave in predictable ways.  This is why he has decided to assign his chapters prime numbers instead of the more usual 1,2, 3, etc. sequence.

Christopher does like dogs, because you always know where you stand with a dog and they don’t shout at you.  So when Christopher finds Wellington, his neighbor’s dog, lying in the grass with a gardening fork (think small pitchfork) stuck in him and blood, he knows that Wellington has been murdered.  That is wrong.  Murderers should be caught and punished, the way they are in Sherlock Holmes stories, so Christopher sets out to discover who murdered Wellington.

Welcome to Christopher’s world.  It’s an orderly world of black and white, of certainties, marred only by the inexplicable reactions of other people.  He’s extremely intelligent and well informed about any number of topics from history to astronomy to mathematics, but bewildered by social interactions and incapable of understanding other people’s points of view. Christopher likes facts: things one knows that are beyond dispute.  Lies and the idea of lying upset him, because if you are saying one thing isn’t true, then how do you know that anything is true? Such paradoxes can send him into a tantrum worthy of a two year old, not a teenager. He tries to calm himself down by working out quadratic equations in his head, but sometimes he just can’t help himself and starts to scream.

Thanks to BPL Book Bingo (“Read a book which has won a literary award”), I was able to fulfill my vague promise to myself and finally read this Whitbread Award winning novel.  Because the entire book is written from Christopher’s point of view, the reader has at least some sense of what it’s like to be autistic, though Christopher’s diagnosis is never explicitly stated.  While the mystery of Wellington’s murder is solved midway through the book, the ramifications lead Christopher and the reader to some startling revelations.

The book is by turns compassionate, moving, intriguing, and funny.  It certainly lived up to its excellent reputation as far as I am concerned.

If you are intrigued enough to read further, Temple Grandin has written several interesting books about her own autism.  In fiction, Kristin recommends  Shine Shine Shine  and How to Tell Toledo from the Night Sky, both by Lydia Netzer. There is also Samuel Hoenig mystery series by Jeffrey Cohen and E.J. Copperman.
Posted by BPL Ref at 9:39 AM 1 comment: 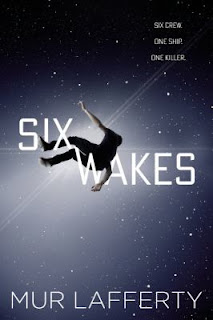 Nevermore members read widely, and this week one reader read Six Wakes by Mur Lafferty, a science fiction murder mystery.  The Dormire is a sleeper ship, carrying thousands of colonists from a war-torn, atmosphere-wrecked, socially disintegrating Earth to a new start on the planet Artemis.  But when Maria Arena and her crewmates awaken, as clones of their original selves, finding blood floating through the air leads them to believe that their former selves have been murdered.  Our reader greatly enjoyed this book and said that he could really see someone making this novel into a movie. 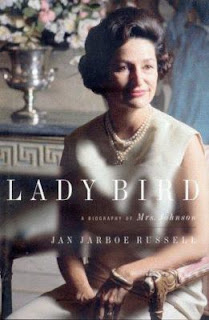 Turning to American history, another reader enjoyed Lady Bird: A Biography of Mrs. Johnson by Jan Jarboe Russell.  This revealing biography of the First Lady shows how much she contributed to LBJ’s presidency in the midst of the Civil Rights movement.  Conversations with family members and political associates make this a well-rounded picture of President and Mrs. Lyndon Johnson.  Our reader said that she enjoyed the book and that Lady Bird was a lovely person. 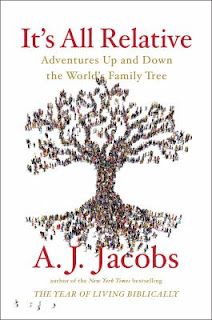 It’s All Relative: Adventures Up and Down the World’s Family Tree by A. J. Jacobs was enjoyed by yet another reader, as the author has explored the DNA connectivity of the worldwide community.  After Jacobs received an email from an eighth cousin who had been able to connect 80,000 relatives, he began a globe spanning journey to explore the far flung branches of his family tree.  Our reader enjoyed the humor, as Jacobs told his own family stories within the scientific explanations of how we are all related. 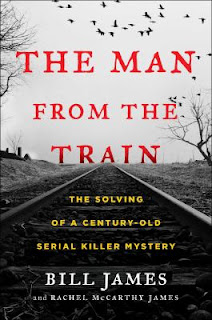 Our next reader began to read The Man from the Train: The Solving of a Century-Old Serial Killer Mystery by Bill James and Rachel McCarthy James, but sadly could not finish it.  Although the book was praised by other critics, our reader found that it was simply murder after murder, bludgeon after bludgeon.  She stated emphatically:  “It has 461 pages of murder and not all of them were near the train tracks.” 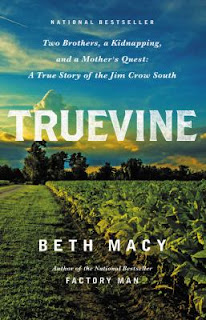 Truevine: Two Brothers, a Kidnapping, and a Mother’s Quest: A True Story of the Jim Crow South by Beth Macy shocked another reader as it recounted the story of two albino African-American brothers who were stolen from their family in 1899 and forced to be part of a circus sideshow for almost thirty years.  George and Willie Muse were depicted as caricatures of themselves as they traveled the world with the circus, and eventually reunited with their mother.  Our reader said that it was an extremely well-researched book and that she learned a lot about Virginian society and race relations in the early 1900’s. 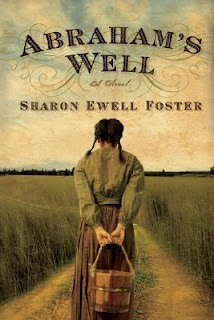 Another novel was enjoyed by another reader, Abraham’s Well by Sharon Ewell Foster.  The story centers around the Trail of Tears, the removal of Native Americans from the southeastern United States and their forced march to what is now Oklahoma.  Foster’s characters are not just Native American, but Black Cherokee African Americans, whose bloodlines were also mixed with white slave owners.  The Cherokee removal is here told from the point of a young girl, Armentia, who experiences tragedy and loss as her family is forced from North Carolina to Oklahoma. 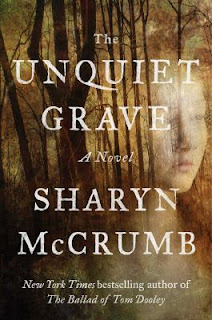 Finally, The Unquiet Grave by Sharyn McCrumb told the story of Zona Heaster, married to Trout Shue in 1896 and dead a few short months later.  Zona appears in a waking dream to her mother Mary Jane, insisting that she was murdered, and Mary Jane has no choice but to pursue justice for her daughter.  Set in recently created West Virginia, the story jumps in time from the actual happenings to a recounting by an aging lawyer more than thirty years later.  Our reader said that everything McCrumb writes is wonderful, and she only wishes the author had included maps in this novel based on historical facts.
Posted by BPL Ref at 11:09 AM No comments: