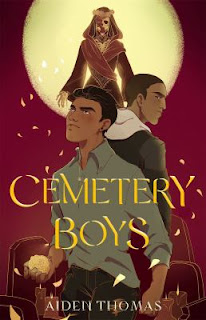 Alas, Ambrea has not rejoined the BPL staff but we are delighted to share one of her reviews.  Fingers crossed that she will continue to share her insights with us.

Yadriel has a special gift:  he can see and speak with the dead.  In his family, every son or daughter has the opportunity to join the brujx and help wayward souls cross to the other side; however, they’re also strict on tradition…and Yadriel doesn’t fit.  To prove he’s worthy of becoming a brujo, he’ll complete his quinces ceremony and help a spirt cross over.

But when his cousin Miguel is murdered and Julian, a classmate, appears as a spirit, Yadriel finds himself caught in between doing what’s right—and doing what his family says.

Cemetery Boys by Aiden Thomas is a very interesting—and, ultimately, enjoyable—book.  It’s bright and colorful and vibrant story, despite dealing with the very heavy topic of death, and it’s fascinating because it creates such a unique concept.  It draws on Latinx traditions and various Hispanic cultures, showcasing a rich and amazing family history behind Yadriel, while simultaneously crafting a detailed story that’s compelling and heart-wreching.

I really think of it as being in the same vein as Holly Black and Anna-Marie McLemore.  It creates a unique world with wonderfully flawed characters, beautifully crafted lore, and incredibly vivid settings and stories.  I truly enjoyed every minute of Yadriel’s and Julian’s intertwining stories, and I loved the seeing the connections and relationships forming between characters.

I also appreciated that Thomas didn’t confine their novel to one single genre.  I expected some level of gothic-horror (because ghosts) and mystery (because murder), but I don’t think I fully anticipated how diverse it would be—that is, it’s a love story and a coming-of-age story and a finding-your-family story.  It’s many different stories in one, which I truly enjoyed.

I suppose the only downside to Cemetery Boys was the fact it was predictable.  What’s the saying?  Ah, yes, according to Anton Chekov, “If in the first act you have hung a pistol on the wall, then in the following one it should be fired.”  Cemetery Boys had several moments like that—moments where the pistol was obvious.

But there’s a silver lining to predictability!  Not so many cliffhangers.