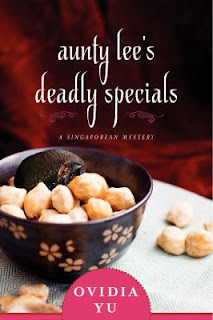 Rosie Lee, better known as Aunty Lee, runs her own restaurant in Singapore where she specializes in traditional Peranakan dishes. Certain food purists who want to argue that some of her dishes aren’t “authentic” are met with Aunty Lee’s unassailable logic that since she is Peranakan anything she cooks is a Peranakan dish. This gives you a good overview of Aunty Lee. She always knows the correct way to cook everything and the correct way to behave and she believes in offering her advice freely, asked for or not.

She also does catering. As the book opens she is catering a brunch for fifty people at the Sungs’ house in honor of Sharon Sung being made a partner in her mother’s law firm.  The estate is lavish, the food is prepared to perfection, and Aunty Lee is consumed by curiosity—as usual.  Unfortunately, all the meticulous preparation is spoiled when two people die, and it appears that one of Aunty Lee’s special dishes might be to blame.

This is the second book in this series that I have read and I’ve enjoyed both.  I always like when I learn something from a novel, and I am intrigued by the depiction of Singaporean society.  It’s less of a melting pot and more of a stew pot (to use foodie terms!) in that there are many different cultures represented but each tends to retain its own customs and food preferences.

Yu’s mysteries, which generally are classified as cozies, tend to have some to them.  This book opens with the disappearance of a young man who had been enticed to come to Singapore to be an organ donor—high prices are paid for kidneys, for example.  Of course this is illegal, but that’s why some are willing to offer extravagant sums to desperate people.

There’s a bit of humor to the books, Aunty Lee being the iron-willed and outspoken person she is. She’s also strong, resilient, and clever.  These traits plus her intense interest in everyone’s business are definite assets if you are going to solve crimes as an amateur sleuth. She’s aided by a diverse cast of friends and relatives, some of whom have their own agendas.  I like that the author is a Singapore native who describes situations briefly but never allows explanations to bog the story down and she never talks down to the reader.

There are also intriguing descriptions of food. A couple of recipes are included at the end which sound very interesting.  I am a non-cook, so there are brief helpful tips about where to eat and what to order the next time I am in Singapore.

The books in the series are: