The Lost Symbol by Dan Brown


Ooh.  Do you like Conspiracy theories?  Cliff-hangers?   If so, The Lost Symbol by Dan Brown will keep you turning pages from one chapter to the next.  I found the book almost impossible to put down until the very end.


And what an action packed adventure it is.   In a Masonic ritual at the very beginning, a plot is planned by a new inductee, Mal'akh, to embarrass the country’s leadership, expose Freemasonry, and unexpectedly, to seek revenge on a family’s misdeeds.   The action really starts with a severed hand.  And then, the race is on.

This is the third Robert Langdon novel.   Again, Dan Brown dishes up a plate full of symbolism, historical mysteries, and brilliant twists and turns.  The villain is as smart as Langdon.   It is a chase up, down, over and through several of the best known sites in Washington.  Just the descriptions alone of the Capital building makes you wonder:  how does he know this stuff?  The symbolism, details on architecture, and secret rites had to have taken years of research.   Did you know that there was an eternal flame in the capital?  Or that a little known misprint about Moses having horns led to statues of a horned Moses?


Freemasonry has had a bit of a black eye in the media over recent years, and we have books that touch on this.  From what I have heard, the rituals described are accurate.  Plus, Brown goes into a bit of a background about the symbolism behind them.  This alone makes this a fascinating read but the information about the Masonic background of the original leaders of America left me way impressed.  Their touch is imprinted all over Washington, DC.  They tried to pass on the best of hope for our country.  Did you know why there is a limit to the height of buildings in Washington?  It has to do with the “Lost Symbol” and the sun daily hitting a monument capstone with an inscription.  (Sorry, don’t want to give away one of the best parts.)


The Lost Symbol also does a great job of introducing mass numbers of readers to Noetic Science.   It’s a newer field of science that is relatively unknown, and wow…it is like magic.  Surely there have now been thousands of Google searches about it, thanks to this book.


Brown’s books are always controversial.  They’re rich in detail, fun and unusual.  You will not be disappointed!

The Sage in the Chevy

Reviewed by Nancy
If you're in the mood for some laughs, try reading Tepper Isn't Going Out by Calvin Trillin (F TRI Main).

In his book, Mr. Trillin, a staff writer for The New Yorker, gives us the story of Murray Tepper, a law-abiding, newspaper-reading, purveyor of mailing lists who simply wants to read his newspaper in peace. What begins to stir up a ruckus is that Murray sits in his legally parked car on the streets of New York city to read his paper. This aggravates other drivers who want his parking spot. They stop, they hover, they give him the questioning look that conveys, "Are you leaving? I want your spot," but Tepper isn't going out. He is reading.

Murray's fame, or notoriety, builds slowly. While parked in front of his favorite deli, the counterman slips into the passenger seat for a chat. Unwittingly, Murray helps the counterman with a problem that has been a burden to him for years. A couple of weeks later the counterman taps politely on the window of Murray's car, and introduces Murray to Jeffrey Green.  Jeffrey, the counterman's grandnephew, is a free-lance reporter. He enters the car, chats with Murray for a while and then writes an article which is published in "The East Village Rag."

After that, more and more people begin tapping diffidently on the window of Murray's car. They occupy the passenger seat briefly, listening to Murray's advice, which really isn't advice at all, but is rather more like simple statements of facts. Somehow they exit Murray's car enriched, clarified, and emboldened to go forth and wrestle life's problems with renewed vigor.

Then disturbances begin to occur. Occasional diffident taps on the passenger window are replaced by lines of anxious petitioners beside the car. People argue about who was where in line, and seekers of enlightenment block the street.  Drivers slow to watch the commotion, and, of course, to see if they can snag Murray's parking spot. Eventually the police have to be called in.

This earns Murray a new enemy:  Mayor Frank Ducavelli, a nut-case of a public servant, so possessed of a passion for order that he has made it illegal to step off the curb to hail a taxi, and so paranoid that all visitors to his office must submit to a full body scan before they are allowed to see him.

You can imagine how Murray gets under his skin, parking and drawing crowds of supplicants and onlookers. Mr. Tepper becomes acquainted with the city attorney who appears with a summons stating that he is in violation of a city ordinance prohibiting unlicensed demonstrations or exhibitions. But really, Murray Tepper was only legally parking and maybe buying some whitefish.

When the American Civil Liberties Union steps in to represent Murray, things gets really interesting.

There's the potential book deal, the court case, the concern of his family and friends, and the crowds cheering and chanting in the streets. Law abiding, unassuming Murray Tepper becomes a folk hero simply because he wants to sit in his car and read the newspaper.

Tepper Isn't Going Out aptly demonstrates the process by which situations are sometimes blown totally out of proportion. If you need a break from what may seem like nonsense in your own life, spend some time with Murray Tepper.
Posted by BPL Ref at 4:24 PM No comments:

Ladyfingers & Nun's Tummies: A Lighthearted Look at How Foods Got Their Names by Martha Barnette (641.014 Bar Main)

Usually I'm too busy eating to wonder how various foods came by their names, but this wonderful little book has me pausing between bites.  Some items I'd never head of before; others were familiar but knowing the history gave them an added dimension.  For example, "Baked Alaska," that ice cream dessert encased in sponge cake and meringue, was known in France as a "Norwegian omelet."  Some scholars believe the word "candy" may come from the Sanskrit word "khanda" which means "sugar in pieces."  There are a number of entries related to Mardi Gras, which highlights the surprising number of foods that have religious connections.  Pretzels are thought to represent arms crossed in prayer, for example.  Even marzipan has an added meaning.

And the "nun's tummy" of the title?  That's a Portuguese sweet egg custard! 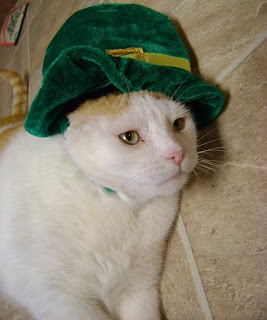 Melon was too busy chasing leprechauns to pose on the appropriate day, but he finally consented to a photo session.

Heroes Come in All Sizes

On March 29, 1996, firefighters responded to a fire in a garage in New York. Amid the wails of the sirens, the noise of the water hoses and the shouted commands, some of the men became aware of an unusual sound, a high-pitched noise that sounded strangely like a kitten. They began to look around and found two tiny kittens on the snow-covered ground, mewing as loudly as they could. Then they saw another kitten. . . and another. In all there were five, in a straight line from the building. The kittens smelled of smoke and some had burns. David Giannelli, one of the firemen and an animal lover, knew that the mother cat must have brought them out. He started searching and it wasn’t long before he found her, so severely burned that her eyes were swollen shut.

This mother cat had repeatedly braved heat and flames to save her kittens. Despite her severe injuries, she nuzzled each kitten, and then purred.

Giannelli called a person he knew at the North Shore Animal League who arranged for the weary firefighter to take the cat and her kittens to a vet clinic. From there, the story of the heroic cat (now called Scarlett) took on a life of its own.

It’s good to be reminded sometimes of life’s “little heroes,” found in unexpected places who do amazing things. My emotions were mixed when I learned that Scarlett had passed away in October 2008: sad for the passing of this special mother, but glad that she had lived much a longer and happier life than anyone would have expected on that snowy night twelve years earlier.

It also reminded me to re-read Scarlet Saves Her Family by Jane Martin & C.J. Suares (636.8 MAR Main). It’s a wonderful, uplifting book about Scarlett, of course, but also about the dedicated men and women who work to save animals. It’s short, less than 100 pages, but packs a lot into that space. David Giannelli wrote the introduction and his is a story worth telling as well. Telling you that the book ends with Scarlett and her surviving kittens safe in new homes isn’t a spoiler: the book is about the journey. Some of the photos will break your heart, but that last photo of Scarlett, bright-eyed and healthy, makes it all better.

If you’d like to read more about Scarlett after the book ends, there are a two good websites to visit:

This is the official tribute page from the North Shore Animal League.

This is a very informative UK site about cats which has an excellent article on Scarlett, including information about her later years.

Goodbye, Scarlett. You made a difference.
Posted by BPL Ref at 3:02 PM No comments:

Take one can of cream of mushroom soup. . .

Back when the era of convenience food was just starting, Peg Bracken and some female co-workers began pooling ideas for quickly made meals, cutting down on prep time and using inexpensive ingredients. Bracken collected all the recipes, added a number of clever comments of her own and tried to find a publisher. She was turned down several times, including by her own writer husband, until a female editor picked it up. The result was the ground-breaking I Hate To Cook Book, which not only gave helpful recipes and tips but made it all right for women to admit that they didn’t like to cook and that meal planning was a chore. She followed it up with several other books, including The I Hate To Cook Almanack (641 BRA Main).

The Almanack is a fun-filled book with entries for each day of the year. Some dates have recipes, some have some rather suspicious sounding “facts,” and others have tips or quotations. It’s a very browsable sort of book, perfect for dipping in to while you’re waiting for the microwave to ding or while sitting in the car waiting for your fast food order to be handed out the window. Naturally I had to check out personal notable dates first (I tried not to take it personally that on my birthday the tips were on how to save money on food and the first tip was “Go on a diet.”) I now know the proper day of the week to clip my nails and in which zodiac sign to shear a sheep.

I’m not too sure about the fried cucumbers but the Dazzleberry Pie (a “dump cake” variation) sounds easy enough. I might actually try that recipe as a surprise for my next social obligation. Those who are familiar with my culinary skills tend to suggest I bring the napkins, ice or bottled soft drinks.
Posted by BPL Ref at 4:18 PM No comments: