Most of the Christmas books we remember fondly tend to be children’s books or else short stories like “The Gift of the Magi” by O. Henry.  Some authors have started doing a book at Christmas, and fans look forward to these every year.  Here are some popular Christmas selections:

The late Thomas Kinkade lent his name to the “Cape Light” books with author Katherine Spencer. All the books are set in a fictional New England town, and are inspirational and uplifting. You don’t have to read them in order to enjoy them.

Anne Perry is best known for her two mystery series, but for several years she’s produced a book with a Christmas theme set in Victorian England.  These are shorter mysteries, just right to squeeze in while trying to get ready for the holidays.  This year’s book is A Christmas Garland, set in 1857 India where a young and inexperienced British lieutenant is supposed to defend a fellow soldier against a charge of being an accomplice to a murder and the escape of a prisoner.

Debbie Macomber has several Christmas themed books, including Christmas at Cedar Cove.  While her books set in Cedar Cove are probably her most famous, she’s also known for her Christmas books featuring the angels Shirley, Goodness, and Mercy. The most recent one in that series is Angels At the Table.

Donna VanLiere has a number of fiction books to her credit, but the ones most often requested are her Christmas books.  Christmas Shoes,  Christmas Blessing, and Christmas Hope have been made into TV movies; Christmas Secret is tentatively scheduled for 2013.

Richard Paul Evans self published The Christmas Box back in 1993.  It became a local hit, and was then brought out by a major publisher, becoming the first of several best-selling books from Evans. Most have a Christmas theme, and several have been filmed.
Posted by BPL Ref at 3:53 PM No comments:

Selena:  I’m reading The Twelve Clues of Christmas by Rhys Bowen and I’m loving it! There is something wonderful about reading a good Christmas mystery or a Christmas love story—or even better, both! I have missed the last two in her “Royal Spyness” series but I am really enjoying this one. Small village, cozy English Christmas, lots of ( accidental) deaths and a cousin to the King. With silly Americans in attendance, too.  I can't wait to see what happens. I’d just keep reading if my children didn't need to be fed! 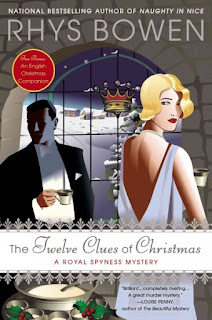 Janice: Three from Galilee by Marjorie Holmes is a wonderful book. It’s a novel about the “lost years” of Jesus’ life.  It’s a sequel to Two From Galilee, which is about Mary and Joseph.  I also pick the poem  The Night before Christmas  because I had to memorize it in school! 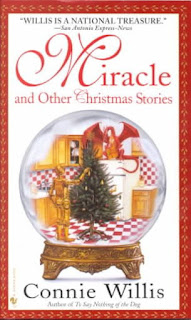 Jeanne:  Last year I read a delightful collection of science fiction/ fantasy Christmas stories and novellas by Connie Willis entitled Miracle and Other Christmas Stories.  Willis has a sharp wit, a vivid imagination, and strong opinions, which I found delightful.  In the title story, she makes an argument for “Miracle on 34th Street” over “It’s a Wonderful Life” as a better movie while producing a story that would make a great movie itself.  There’s also a murder mystery set in an English country house, a bit of Christmas horror, and Willis’ recommendations for Christmas books and movies.

I also still enjoy The Best Christmas Pageant Ever by Barbara Robinson.  I can never forget those Herdmans!