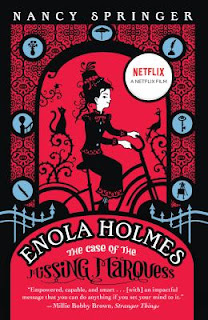 A librarian friend and I exchange books on a regular basis, since we like a lot of the same authors though sometimes we each find the other’s selections to be a bit dubious. Such was the case when I opened the latest box from her and found the first four books in the Enola Holmes series.  While I have no qualms about picking up a Young Adult or children’s book to read*, I have been a little burned out on Sherlock Holmes. After all, there seems to be no end to the books, TV shows, and movies featuring the character.  Some of these are quite good, but there are just so many of them.  So. Very. Many.

As it turned out, I needed to read a YA book for Book Bingo so I decided Enola would do.  She was handy and the book looked short.

The premise is that the Holmes boys (Mycroft and Sherlock) have a much younger sister back at the family estate in the care of their mother, their father having passed away sometime previous to the start of the story.  Their mother is a staunch Suffragist with radical notions about women being able to make their own choices and to fend for themselves if need be, so Enola has been brought up to know all sorts of strange things, such as how to ride a bicycle, how to break codes, and how to think for herself.  She is less well trained in, say, needlepoint or cookery.

As the story opens, Enola discovers that her mother has disappeared.  There is no note, no explanation. When the next morning comes and there is still no word, Enola travels to town to make enquiries and to send telegrams to her brothers, advising them of the situation.

They turn up promptly, shocked at Enola’s lack of ladylike qualities and propose to rectify that by sending her off to boarding school while they track down the errant Lady Holmes. Enola in turn knows enough about boarding schools to be horrified, but they refuse to listen to her and go about the preparations.

So Enola takes to her heels and runs away.

She must be clever enough not only to make her own way in the world, but to evade her brothers—including the one who is the world-famous detective—and to find what has become of her mother.

I was surprised at how much I liked this book.  In fact, I read the other three in quick succession and then checked out the last two from our children’s library. While each book has its own mystery to solve, they form one long story arc.

Enola is clever, brave, and ingenious, every bit a match for her brothers.  She is young and makes some of the mistakes of youth but she is extremely resourceful.  She is also a caring, decent girl who wants to help others. It was delightful to see her grow and become more confident as the books progressed.

I also found I enjoyed seeing Sherlock from a fresh perspective, that of brother and (somewhat stodgy) gentleman. To his credit, he does gradually re-examine some of his prejudices over the course of the series in a way that is believable and doesn’t necessarily contradict the original tales.

One of the things I liked was Springer’s honest description of the London of the day and the status of women.  While we tend to picture it as filled with well-dressed, well-fed genteel folk, Enola is very aware of the dire poverty and degradation that lurks at every turn.  Some of the descriptions were hard to read, even though Springer doesn’t linger there. The rosy view of women then as being all afternoon teas and beautiful dresses doesn’t take into account the reality of many social and economic barriers, not to mention corsets.  (If you laughed at the latter, you won’t when you finish the series.)

Fun, thoughtful, empowering, and informative, these are marvelous adventures. I was sorry to finish the last one even as I was aching to find out what happened.  To my delight, I found that Springer has finally written another in the series, so I will be watching for Enola Holmes and the Black Barouche to come out in August 31.

In the meantime, I will also try to watch the Netflix adaptation of the series starring Millie Bobby Brown as Enola and Henry Cavill as Sherlock.

The series is better read in order:

The Case of the Missing Marquess

The Case of the Left-Handed Lady

The Case of the Bizarre Bouquets

The Case of the Peculiar Pink Fan

The Case of the Cryptic Crinoline

The Case of the Gypsy Goodbye

*I sometimes find that YA and children’s books are more committed to telling a good story than adult books which sometimes pad the prose to the point that I wonder if the author is paid by the word.