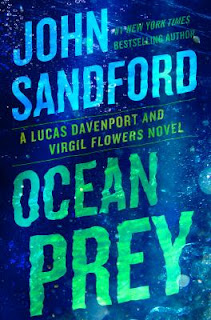 Welcome back  to Kevin Tipple who has graced us with his review of the new novel by the ever-popular John Sandford.  Kevin's own blog, the mulit-award winning Kevin's Corner, provides reviews, author news, and more.  Check it out at https://kevintipplescorner.blogspot.com/

It is five months after it happened when Lucas Davenport is finally brought into a case. The FBI got nowhere, as did the DEA and just about every other law enforcement agency, and a certain U.S. Senator has been made aware of Lucas's special skill set. He solves cases. Especially ones those other folks have failed to solve.

The murder of three Coast Guardsman is one of those things. The three tried to intercept drug runners just off the coast of Pompano Beach, Florida. They were quickly killed while doing their duty. The suspects fled and escaped. DEA, FBI, The Coast Guard, and others have spun their investigative wheels and gotten nowhere. U.S. Senator Christopher Colles of Florida wants him to work the case. Lucas's wife, Weather, knows he has to go, but wants him back in time for Thanksgiving week as there are a number of family things planned.

With his marching orders on the job and at home, Davenport assembles a team and heads to Florida. While the FBI task force leader, Dale Weaver, is receptive to the help, some folks on his task force are not. Before long that attitude begins to change as Davenport and the team begins to make progress in an increasingly violent case. A case that will involve a lot of Virgil Flowers as an undercover deep-sea diver and others.

As some reviews have noted, technical details regarding underwater diving and such are a major plot point of this book. While that annoyed some folks, the diving stuff here reminded me of books by Clive Cussler and others. It also is worth noting that this reviewer always planned to learn how to scuba dive as he has had a strong interest, but a lack of competent swimming ability as well as health issues in recent years pretty much sunk that idea.

Ocean Prey is billed as A Lucas Davenport and Virgil Flowers Novel and it is though this reads to be a somewhat muted version of Flowers. Action is the driving force here as it has been for quite a number of novels as these familiar characters have long since been fleshed out as far as they will be. Still, even when you think you know what is coming, author John Sandford, throws a couple of explosive events one never say coming.

My reading copy came by way of Lesa Holstine who also reviewed the book here.