Five for Silver: A John the Eunuch by Mary Reed and Eric Mayer 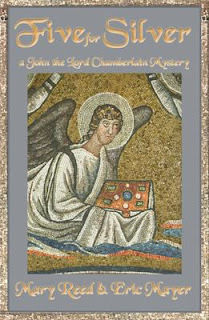 John the Lord Chamberlain has become embroiled in another mystery—a murder with no witnesses and no apparent motive.  Peter, John’s servant, has begged for help in uncovering the culprit behind his friend’s murder.  Soon, John finds his quest leading him throughout the plague-ridden city, speaking to lawyers, actresses, antiquities dealers, mausoleum builders, poets, churchmen, fools, servants and more.  But as the plague continues to circle Constantinople, John discovers many avenues of inquiry cut off as more people succumb to the horrific disease.

I’ve read historical fiction set in Victorian London, late nineteenth-century Malaysia, colonial America, ancient China, twelfth-century Europe, and beyond; however, I’ve never read a book set in fifth-century Constantinople.  It was an interesting experience to read a novel set during this time frame, particularly in a city I only knew vaguely from a college course on the Crusades—and a certain catchy song.

I was fascinated by a lot of the background imagery and snippets of history that lurked in Five for Silver by Mary Reed and Eric Mayer.  It was interesting to see the confluence of cultures within Constantinople that the authors brought to life; likewise, I was very intrigued by the portrayal of the Plague of Justinian within the city.  Occasionally, I would forget that the city was plagued by disease (yes, that was a terrible pun; no, I will not apologize), until the authors would remind me of it.

It usually came in the shape of smoke drifting over the city from plague ships burning in the harbor, but, sometimes, it was a random corpse in the gutter or mention of plague pits outside the city walls.  Either way, Reed and Mayer made me very glad to be living in a modern world with antibacterial soap and antibiotics.

Although Five for Silver is fashioned as a mystery, I found the novel leaned more toward historical fiction.  John follows the threads of his murder investigation, but I didn’t feel the same sense of urgency I usually do when I read a mystery novel.  I often found myself more absorbed in picking apart the interweaving stories of John and his household, rather than learning more about the murder suspects.

Additionally, I wasn’t quite satisfied with the resolution of the story.  Hercule Poirot has spoiled me a little, I think—I mean, he wraps up his investigations so neatly and discovers everyone’s secrets, I’ve forgotten that mysteries are sometimes much messier.

Throughout the book, John is frequently confounded and thwarted due to both a lack of information and the plague collecting his potential witnesses.  He completes his investigation, of course, but I found the answers weren’t what I expected.  While it does lend an authenticity and a tinge of reality to the story—because real life is rarely neat or orderly or tidy, particularly in the midst of a pandemic—I was just a little disappointed.

Overall, Five for Silver is an interesting novel with a very vivid setting and a moderately satisfying mystery.  I recommend it for readers who want a heavy dose of historical fiction mixed with their murder mystery; however, I will note this is actually the fifth book in the series.  It might help clear up some confusion about recurring characters or past events if you start at the beginning (unlike me).