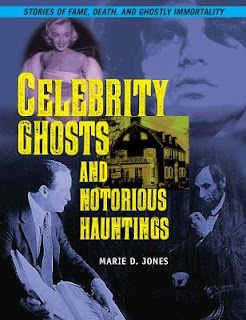 Since this book showed up just before Halloween, I thought it would make a good seasonal read.  How could it miss?  As it turns out, it could—at least for me.

The book started out promisingly enough.  There is a great chapter which discusses the different kinds of ghosts and theories about ghosts. For example, one category is “living ghosts” which would seem to be an oxymoron but which is explained as seeing people from another time going about ordinary tasks, seemingly unaware of being observed.  One theory is that these are glimpses into time slips or parallel universes.  Another is the “imprint ghost” which is seeing the same deceased person repetitively performing a task: these sightings may be by different people but the ghost is always doing the same thing in the same place.  This theory holds that these sightings are residual energy left by a person. Then there are the “sentient ghosts,” those who seem to be aware and try to communicate.  And so on.  There is also a discussion of the various ways in which ghost hunters try to document their findings, what consciousness is, and theories about why some places are more likely to be haunted.

I thought all of that was very interesting and was keen to see it applied to the promised tales.  Unfortunately, the stories were very brief and somewhat generic as the author skipped from one subject to another.  Reading that people see Elvis walking around Graceland or hear his music there, or in the studio where he recorded or that people have seen Marilyn Monroe dancing the ballroom of the Hollywood Roosevelt Hotel without first-hand accounts or much in the way of detail didn’t spark my interest.  Some just sent me to the internet to find out for an explanation, such as “Actor Victor Kilian’s ghost haunts the forecourt area, pacing back and forth as if looking for someone, although he was murdered at a different location.  His killer was never found, and those who have seen his dark figure… suggest he might be restless from trying to find the perpetrator.” Who?  What?

This would be a good browsing book for anyone who wanted to pick it up for a few minutes.  At 368 pages, there is a lot to browse and it is divided up by categories such as “Plantations,” “Bridges, Roads, and Caves,” and “Notorious Ghosts.”  There is also a section of first person accounts but that doesn’t start until page 337 and I burned out around page 103.  I’d have done better to have read the first chapter and then jumped to the last, but that’s just me.  I wanted more detail.  Someone else might gobble up the earlier bits of info like a movie-goer eating popcorn, and this book is perfect for that.

Jones did a lot of research and has an obvious love for Old Hollywood though a lot of modern stars traipse through the pages too.  There is a nice list of articles in the back of the book and—be still, my beating heart!—an index! This came in very handy when I wanted to check a particular person or place.

This isn’t a bad book at all—it’s just not the book I thought it was going to be.  And that’s okay. It’s stuffed full of brief stories about interesting people and places that might encourage the reader to look further, just as I did with Victor Kilian (and that is a fascinating story). While I didn’t finish a straight read through, I think I might pick it up again sometime and read some more.

Nevermore was a bit quieter than usual this week, but we still had some fascinating books brought to the table for discussion.

A Life in Death:  The True Story of a Career in Disaster Victim Identification is the memoir of Detective Inspector Richard Venables, a member of the UK Police’s Major Disaster Advisory Team. Starting in the UK in the 1980s, Venables utilized both his inherent interest in forensics and his luck (?) of being in the right place at the right time, and became a world-leader in the identification of disaster victims. Venable was on duty in 1989 at a UK soccer game when a human crush led to the deaths of 97 people and became known as the Hillsborough Disaster. Our reader noted how Venables taught the forensic skills that he had picked up to anyone that he was working with, which in turn increased their skills as police investigators. Our reader was fascinated with this book, and even knowing that forensics might not be everyone’s cup of tea, highly recommends it. 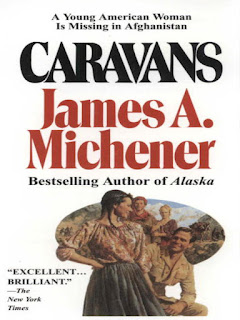 Caravans by James A. Michener was reviewed by two of our readers this week. Set just after World War II, this heavily researched novel provides an excellent background to the political situation in current day Afghanistan. Mark Miller is a young employee at the American embassy who has been tasked with locating a young American woman, Ellen Jasper. Miller tracks down Ellen’s husband, an Afghani engineer working on the construction of a hydroelectric dam on the Helmand River, and finds that Ellen has run away from her marriage to join the nomadic tribes. Michener travelled to Afghanistan multiple times for research, and both of our readers pointed out that his descriptions increased their understanding of the events and locations in today’s news. Both readers very highly recommend this novel about a pivotal Middle Eastern country. 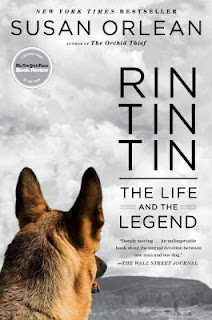 Rin Tin Tin: The Life and the Legend by Susan Orlean is the history of one of the leading box office stars of the 20th century. American soldier Lee Duncan discovered a newborn puppy in a bombed out kennel in France and smuggled “Rinty” back to the United States. Duncan trained Rin Tin Tin and with the help of a friend got film of the German Shepherd doing tricks. Duncan went door to door to the studios, trying to convince people that the dog could be a star, and with Warner Brothers he struck gold. Appearing in 23 movies, Rin Tin Tin became one of the biggest stars in the world and saved the Warner Brothers Studio from bankruptcy. According to our reader, this was the most fascinating book that she had ever read, and every paragraph in this book contained new information to her, making it an excellent read.

Open Veins of Latin America: Five Centuries of the Pillage of a Continent by Eduardo Galeano

How Stella Learned to Talk: The Groundbreaking Story of the World’s First Talking Dog by Christina Hunger

A Good Day for Chardonnay by Darynda Jones

For Your Own Good by Samantha Downing 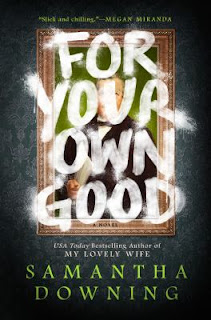 Private school teacher Teddy Crutcher is weary of his students. Most of them are spoiled little brats with parents who are just as bad. Teddy has had enough of teenagers who can’t think for themselves and parents who expect their little darlings to have all A’s, no matter the quality of their work. His students deserve to be knocked down a peg or two; after all, it’s for their own good.

Belmont Academy is a most prestigious school, a proper stepping stone to the Ivy Leagues. Many of the teachers are former students themselves, part of the Belmont family. The teachers care, and truly want the students to achieve their dreams. But something sinister is brewing beneath the surface. Soon it’s more than SAT scores and vying for valedictorian status, as the bodies begin to fall.

Students, parents, teachers, and even headmasters are at risk as Belmont goes from a serene place of learning to a hall of horrors. What seemed to be a safe haven is suddenly fraught with danger, whether to life and limb or to one’s reputation. Anxieties, ambitions, and ardor motivate the various characters. High school is usually drama filled, but this year at Belmont is reaching a whole new level.

Downing’s debut serial killer novel My Lovely Wife was a real roller coaster ride and she continued her sardonic and somewhat deadly humor in her next book He Started It, where three adult siblings were forced to recreate a childhood road trip, with you guessed it, deadly consequences.

Samantha Downing is the queen of red herrings, and her newest novel does not disappoint. I found it very hard to know which characters to trust, and the twists and turns continue to the very end.

Email ThisBlogThis!Share to TwitterShare to FacebookShare to Pinterest
Labels: For Your Own Good, Kristin, private school, Samantha Downing, students, thriller

A Good Day For Chardonnay: A Novel by Darynda Jone

Kevin Tipple is an author, reviewer, and blogger.   Kevin's Corner is his award winning news and review blog. Check it out! 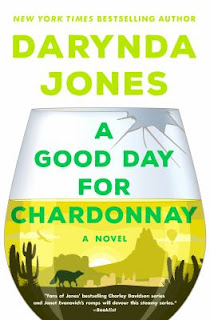 A Good Day For Chardonnay: A Novel by Darynda Jones is the second in the series that began in A Bad Day For Sunshine. It was in that book that readers were introduced to the quirky town of Del Sol, the newly elected sheriff Sunshine Vicram, and her family. While some things were resolved in that book, one major thing was not, and that continues here in a secondary story line.

One of several secondary storylines in a complicated and occasionally a laugh out loud read. In the main storyline, Levi Ravinder is involved in a serious altercation in the parking lot of the Roadhouse Bar and Grill. To say that Sunshine and Levi have history is to say the sun and the desert have a history. This night Levi was trying to stop three men who were beating and stabbing Keith Seabright. What Seabright was doing at the place, what his connection with Levi is, who the three men are, and other questions are questions Sunshine needs official answers to as fast as possible. All she knows for sure, based on what Levi is saying is that he is military of some type and had to drugged to be losing to his three assailants. Instead of going to the hospital as the clearly injured Levi should, he soon escapes custody and disappears into the night. Presumably headed north in pursuit of the three who left the scene in a truck.

As in the first book, relationships in and outside of family power this novel. Therefore, as many things from the first book continue here, it is not possible to discuss those things that drive forward the secondary storylines in this read.

Along the same vein, it is also not possible to discuss two glaring technical errors in the last fifty pages without creating spoilers. Suffice it to say, those of who have spent time in hospitals or know a thing or two about police vehicles, might be briefly and annoying jolted out of the world of the book.

That being said, this is a funny read that reminds this reviewer of the Sheriff Brady series by J.A. Jance with a lot more humor. This read also has a multi-page and graphic sex scene between two characters that may be too much for some readers. One did expect the romantic moment though this reader did not expect the graphic detail of the event. The read also has plenty of action, violence, misdirection, and mystery.

All in all, A Good Day for Chardonnay is a good read and ties up the primary storyline and several ongoing issues from the first book quite well.

A Good Day For Chardonnay: A Novel

My reading copy came from the Skyline Branch of the Dallas Public Library System.