The Testament of Loki by Joanne M. Harris 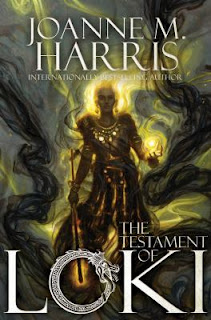 I have always had a fondness for Norse mythology dating back to my elementary school days which was nevermind how long ago.  A couple or four years ago I came across Harris’ book The Gospel of Loki which is a brilliant retelling of the myths from Loki’s point of view (talk about unreliable narrators!) I recommended it to many people and reviewed it here.


I was sorry when the book was over because Loki was such a memorable, entertaining character.  I wanted more.  Lucky for me, Harris apparently didn’t want to quite give up on Loki either and wrote The Testament of Loki in which the God of Mischief finds a way out of Ragnorak and into. . . a computer game.

It’s his chance at becoming flesh again and he does accomplish that, except that he is sharing the body with its original occupant, a teenage girl who already had problems of her own.  Loki soon finds that he isn’t the only one to have escaped; Odin has preceded him and is playing a complicated game of his own which isn’t likely to bode well for Loki. But Odin has some surprises awaiting him as well. . . .

I admit I wasn’t sure about this.  It sounded a little too—cute, maybe, but I should have trusted Harris.  It’s a glorious ride through mythology, social commentary, and world-building, all conducted by one of fiction’s best and slipperiest narrators.  Even as I cheered for Loki, a part of me wondered if I was being suckered but hey—if you have to be played, be played by the best. I had several favorite scenes, mostly involving Loki’s exploration of this brave new world (especially the food, like that delicious exotic chocolate.)

All I can say is that I was vastly entertained and am sad that there isn’t a third book.  I am going to read Harris’ two juvenile novels set after the Fall of the Gods just because I enjoyed her writing.
Posted by BPL Ref at 10:11 AM No comments:

As The Frangipani Tree Mystery opens, Charity, Irish nanny to the daughter of the Acting Governor of Singapore, has fallen to her death from the balcony.  Is it an accident or murder? Chief Inspector Thomas Le Froy is sent to investigate.  It’s a good plot with twists and turns, filled with family secrets and conflicts, flavored with an exotic locale.  Singapore in 1936 is still under British rule, giving the reader a melting pot of cultures and classes. I like that the author Ovidia Yu is a native of Singapore, since I feel I can give her perceptions more weight than something written by an outsider.

What I love the most is the narrator.  Chen Su Lin is a sixteen year old girl who has been educated in the Mission School where she has honed her English and taught herself shorthand and typing.  She’s an orphan and considered a “bad luck child” because both her parents died of typhoid and she walks with a limp from a bout with polio.  Su Lin is grateful that her grandmother Ah Ma (who runs a lucrative  black market business) didn’t sell her, as most would have done with such a child; but she still may be married off as a second wife as part of a business deal.  This is not something she wants; as she tells us the Mission School had shown her an array of possibilities for her future that did not include “domestic captivity” either under her grandmother or a mother in law.  She has dreams of becoming a journalist, a lofty notion for even a white woman in 1936, much less a Chinese orphan. Miss Nessa, a sister to Sir Henry and an occasional instructor at the school, also has ambitions for Su Lin because she is obviously intelligent and speaks the King’s English so well.  Miss Nessa thinks she might actually be able to become a maid for Chief Inspector Le Froy.

With Charity’s death, Su Lin is pressed into service to look after Dee Dee, Sir Henry’s seventeen year old daughter with the mind of a child. She also has a covert mission:  Inspector Le Froy has noted Su Lin’s keen observation and the fact that she is fluent in English, Chinese, and Malay, so he wants her to report to him anything that might bear on Charity’s death.  Su Lin soon learns that behind the façade of a united aristocratic British family there are dark undercurrents and that she will need to tread very carefully.  Her astute commentary on family relationships, racial and cultural differences seemed honest and were often ironically humorous. This could have been a very dark book, but it’s surprisingly amusing.

Su Lin charmed me totally. She is, as another reviewer said, “heartbreakingly practical.” She is wise beyond her years, having no illusions about her station in life but she doesn’t let that define or restrict her.  I’m rooting for her all the way.

I also enjoyed the setting, with the blending of cultures in Singapore in the days before the Second World War. Old World British colonialism is in its last gasp—not that Sir Henry is aware of that in any shape, form, or fashion. Lady Palin, Sir Henry’s second wife, hates living in what she considers a cultural backwater, while Sir Henry’s son Harry considers himself a native Singaporean with no grasp of how his race and class insulates him.

This is the first in a series of mysteries with Su Lin and Le Froy, and I look forward to reading more.
Posted by BPL Ref at 1:16 PM No comments:

Animals and Men by art historian and museum director Kenneth Clark captured the attention of one of the Nevermore members.  A coffee table type book with glorious illustrations, the book details the relationship between humans and animals as depicted in works of art, spanning from cave paintings to classic Egyptian art to Western artists such as da Vinci and Degas. Our reader was particularly interested in commentary on early art and totems. 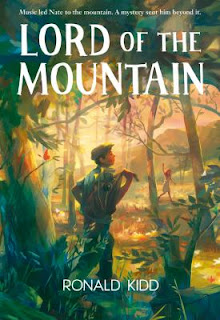 Juvenile fiction was up next with Lord of the Mountain by Ronald Kidd which tells the story of the Bristol Sessions through the eyes of thirteen year old Nate Owens whose minister father takes a very dim view of the music and new recording technology that so enchants his son.  The reviewer was enjoying this look back at 1927 Bristol and A.P. Carter, and thought most other readers would like it too.

Before Westeros made it into print, George R.R. Martin wrote stand-alone science fiction and fantasy novels such as the one a new Nevermore member chose.  Fevre Dream begins in 1857 along the Mississippi River where steamboat captain Abner Marsh receives an unbelievable business proposition.  Wealthy patron Joshua York will finance the construction of an elaborate new steamboat which Marsh will co-own with York.  After the new boat is ready, Marsh begins to notice that York and his friends have some odd behaviors which include avoiding daylight and it turns out that some suspicions are well-founded.  The book was greatly enjoyed by our reader who recommended it for all vampire fans. 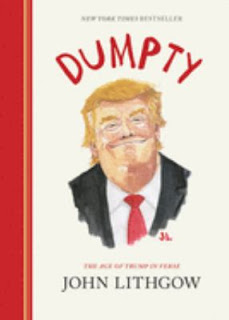 Actor John Lithgow has a new illustrated book of verse out entitled Dumpty: The Age of Trump in verse. The Nevermore member said it covered a number of political figures and that the illustrations were “a riot.” 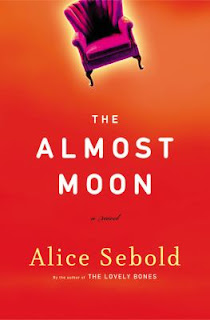 Alice Sebold, author of The Lovely Bones, has an equally dark book in The Almost Moon.  As the book begins, middle aged divorcee Helen shockingly kills her elderly mother. The rest of the book explores Helen’s life and relationships, all informed by mental illness.  While the book can be grim at times, our reviewer said it was a good read and showed how “mental illness metastasizes to others in a family.” 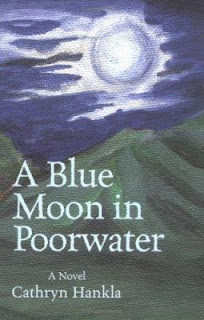 Blue Moon in Poorwater by Cathryn Hankla came out in 1988 but is set in 1968 in an Appalachian mining town. Ten year old Dorie and her best friend are confronted with a rapidly changing world, and not just the one of rockets and politics.  Dorie was described as a mix between Scout and Anne Frank, a young girl trying to make sense of the world. Her older brother has returned, and is seen as some sort of dangerous hippie; her father, a miner, is fighting for workers’ rights; and Dorie is becoming aware of the social divide that exists even in a small Virginia town.  This book captivated its reader who proclaimed it to be “better than Where the Crawdads Sing.” 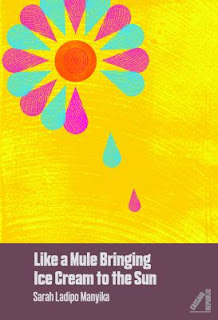 The enticingly titled Like a Mule Bringing Ice Cream to the Sun drew in another member who admits she had some doubts before starting this slender volume. The story centers around Morayo Da Silav, a 74 year old Nigerian woman living in San Francisco. She’s sophisticated and well-traveled, a retired English professor was once the wife of an ambassador. Morayo retains her love of life but an accident threatens to curtail her independence.  Our reviewer said that author Sarah Ladipo Manyika did an excellent job of exploring aging and creating memorable characters. 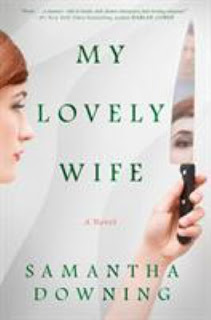 My Lovely Wife by Samantha Downing concerns a couple who share a hobby— serial murder.  The book is narrated by the husband who picks women up in bars, then his wife tortures and murders them.  Then the recently killed body of one of their victims is found, only she should have been killed months ago, leading our narrator to wonder just how far he should trust his wife.  The Nevermore reader said that this book kept her from moving and that she read the entire book in one day! 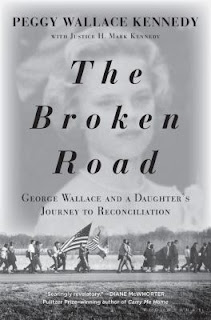 In The Broken Road:  George Wallace and a Daughter’s Journey to Reconciliation, Peggy Wallace Kennedy describes growing up as the daughter of the staunchly segregationist Wallace.  She maintains that some of his rhetoric was due more to politics than to personal belief and that he attempted to atone for it later in life.  Our reviewer said she found it interesting, and enjoyed it more than she thought she would.
Posted by BPL Ref at 10:57 AM No comments: