The Kind Folk by Ramsey Campbell 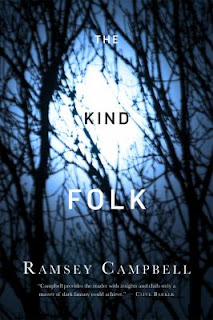 What would you do if you suddenly discovered your parents weren’t your parents?  That’s just what happens to Luke Arnold on national television, no less.  He’s been dragged to the Brittan’s Resolutions show—a sort of British Maury Povich program—because his father Maurice suspects Luke is really the son of his brother, Terrence, despite tearful denials from Freda, Luke’s mother.

As it turns out, none of them are related to Luke at all.

Luke is left in an uncomfortable situation. His erstwhile mother wants to pretend nothing at all has changed, while others kept asking Luke if he isn’t curious about his biological parents.  His partner, Sophie, is expecting the couple’s first child, but she is content with whatever Luke decides to do.

Luke isn’t sure what he wants, except that he wishes the TV show had never happened.  He has the impression that his Uncle Terrence knows more than he is telling, but Terrence dies suddenly of a heart attack before Luke has a chance to question him.  He leaves his house to Luke, and when Luke goes to look it over, he finds that Terrence left a journal with many curious notations—not to mention an odd collection of artifacts, most of which seem to pertain to ancient folklore. And then Luke begins to feel he's being watched. . . .

Ramsey Campbell has been called “Britain’s greatest living horror writer,” which may be one reason I haven’t read his previous books.  Horror is not my favorite genre, not since Richard Matheson kept me awake several nights; I have enjoyed certain books (The Seeker by R.B. Chesterton springs immediately to mind) that deal more in creepiness and unease instead of gore and projectile regurgitation. I was drawn to The Kind Folk because the reviews said it drew from folklore, which I usually enjoy.

Having finished the book, I’m still not quite sure what to make of it.  The jacket copy didn’t help; it didn’t exactly fit the book I read.  I understood the underlying implication of Luke’s birth, but the broader possibilities left me more than a bit baffled.  This is probably a flaw more in the reader than the writer. I also wonder if it would have helped had I known more about the history and folklore of some of the places visited.

On the other hand, Luke’s uncertain probing into his origins held my attention.  His attempts to decipher exactly what Terrence meant kept me turning the pages but the most mesmerizing parts took place in the woods and fields where Luke feels he is being watched, maybe even glimpsing movement around the trees.  I have to say that I looked at the foliage around my house with deep suspicion after reading the book.

Campbell wrote on his website (www.ramseycampbell.com) that if he cannot achieve awe, then he strives for “a lingering disquiet.”  I think he has achieved that with The Kind Folk.
Posted by BPL Ref at 9:50 AM