The Roanoke Girls by Amy Engel 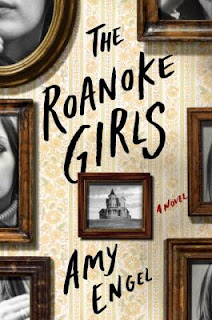 “Roanoke girls never last long around here.  In the end, we either run or we die.” --Allegra
Black and white photographs on the wall show the Roanoke girls who have lived in the sprawling house on the prairie.  Some have escaped.  Some have not.

After her mother’s suicide, fifteen year old Lane moves from New York City to small town Osage Flats, Kansas to live with her maternal grandparents.  Gran and Granddad have a farm, but also family money, so they are the proverbial big fish in a small pond.  Beyond that shimmering surface, secrets lurk in the murky depths.

Cousin Allegra is near Lane’s age and absolutely ecstatic to have another teenager in the house.  The girls look enough alike to be sisters.  No surprise there, all the Roanoke girls have the same dark haired beauty.  As Lane settles into small town life, she soon meets Allegra’s boyfriend Tommy, friend Cooper, and a few girls who are more competition than friends.

But that was then.

The book is separated into alternating chapters of “then” and “now.”  “Then” was the single summer Lane spent with her family before becoming one of the Roanoke girls who ran. “Now” is a decade later, when Granddad called and asked her to come home, because Allegra is missing.

Lane returns from an aimless, rambling life in California to Kansas to help find Allegra.  Tommy has become the local law enforcement and finally married to someone else after Allegra refused to commit to him.  Lane sees Cooper again and in some ways it’s as if she never left.  Lane senses the swirling undercurrents of secrets kept and lives ruined, even lives lost, but feels she must stay to help Allegra.

Clues about the things hidden then and now are revealed slowly.  The Gothic atmosphere winds itself around the characters like a fog, even as the summer sun shines brightly.  The house itself feels like a character, bearing witness to all that has gone before.  Lane then and Lane  now, and Allegra then, both feel the charismatic pull of the powers of the Roanoke estate.

Days after finishing this book, it is still on my mind.  I found it creepy in a spine tickling way.  While reading, I was continually examining the motivations behind the characters’ actions and looking at how some people control others.  Family relationships are not always simple, and within the Roanoke family they are more convoluted than most.  Since I am always curious about authors’ other books, I looked and discovered that Amy Engel has published just two other books, a young adult series.  I will be on the lookout for upcoming novels.  Although not my usual reading fare, I enjoyed the shivers and prickles as the story unfolded.
Posted by BPL Ref at 11:39 AM