Fillet of Murder by Linda Reilly 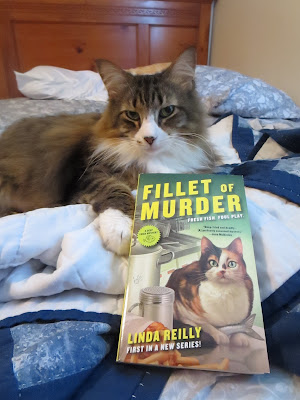 Talia Marby seems to have come full circle.  As a teenager, she worked for the Lamberts in their fish and chips shop before moving to Boston to work in an upscale real estate office.  Even though the job was lucrative, she loathed it. She ended up ditching the job and her boyfriend to head home to the Berkshires. Bea Lambert is a motherly sort who took Talia back under her wing and gave her place to work while she sends out resumes, hoping for a property manager’s job.  It’s been a godsend for Bea as well, since husband Howie has been laid up in the hospital, leaving Bea worried and stressed.  To make matters worse, neighborhood shop owner Phil has been pestering Bea non-stop to sign a petition against a proposed comic shop. Fed up, Bea says some things she shouldn’t have. . . which is why when Phil is found murdered, Bea goes on the suspect list.

The subtitle is A Deep Fried Mystery, and there’s plenty of frying in this first in series book.  Naturally it was the charming green eyed calico cat on the cover who drew my attention, and one eventually shows up in the book.  This is one of those light, fun mystery books that I enjoy: solid characters, good use of setting, and interesting plot.  As with most cozy heroines, Talia is a bit naïve and likes to stick her nose in police investigations but she’s not quite as foolhardy as some.  I like her pluck and her inventiveness as she looks for ways to help Bea make the shop profitable, and I like that she’s comfortable with who she is. (Translation:  she doesn’t sit around moping over men, her waistline, her finances, etc.) Her reaction to a problem is to try to solve it. Bea, a British ex-pat, is lively and motherly, and an effort has been made to flesh out the supporting characters.

The New England setting, while not fully realized, comes through enough to give me a sense of place.  The shopping center where the eatery is located is designed as a sort of faux English village, complete with cobblestones, which adds a nice touch.

The mystery itself was nicely paced, and there was an interesting resolution.

Best of all were the descriptions of the food: the smells, the prep, the sizzle, and of course, the taste.  Recipes are included.

This was a fun way to spend a couple of hours and I will be reading the rest of the series. 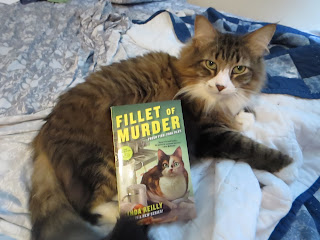