Too Lucky to Live by Annie Hogsett 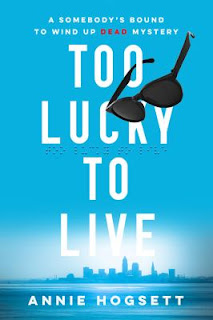 Using numbers he and Rune, an impoverished young boy, choose, Tom Bennington III, a well-educated blind(?) man, buys a lottery ticket. He wants to prove to the child that the lottery is a waste of money. He purchases a winning ticket. Over $500 million is coming his way. Suddenly, he and the boy are targets.

But wait! The afternoon before the winning number is announced, Tom is rescued from a crosswalk, after being startled by a honking driver and dropping his just purchased groceries. His rescuer is Allie (Alice). The pair fall quickly into like, with a little lust thrown in.

Rune and Tom are neighbors in a tough neighborhood. Before the drawing, Rune announces his numbers in an apartment complex community room. Everybody knows. Quickly, Rune’s mother is assaulted and hospitalized, Rune is in hiding and after both Tom’s and Allie’s homes are ransacked, Tom and Allie are calling 911 repeatedly and hiding in hotels.

Despite the murders, the blood and guts, and the precarious situations, plus some incredibly dangerous (and stupid) moves on the part of the main characters, and the occasional slow pace, the story is funny. It is easy to sympathize with the main characters despite their flaws and the foolish risks they take. Who hasn’t wondered what would happen after winning the lottery?

This is one take. Great literature? No, but a fun read.