Goodbye for Now by Laurie Frankel 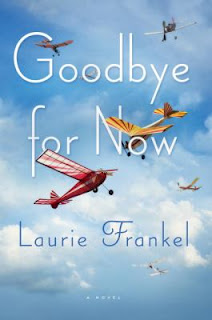 Sam Elling is a software engineer with the ability to create amazing programs.  In fact, his latest algorithms for an internet dating program are so good that they get him fired.  After all, what good is Sam to the company if their clients find soul mates in just one match, and don’t need an ongoing subscription to the service?  Fortunately, one of his test cases matches Sam up with co-worker Meredith Maxwell.  To computer nerd Sam, Meredith (or Merde, as he uncomfortably jokes at their first meeting, yet she laughs anyway) is much cooler and seemingly out of his reach, but after all, his algorithms have worked their magic.  Sam and Meredith just fit.

In the wake of Sam being fired, Meredith’s grandmother Livvie dies.  Meredith and Livvie had been extremely close and Meredith is swamped with the pain of losing her.  When Sam and Meredith find Livvie’s tickets for the last game of the Seattle Mariners’ regular season, they layer on extra clothes, smuggle in Cool Ranch Doritos (Livvie’s favorite baseball food) and a thermos of hot chocolate (Livvie believed that $7 was way too much to pay a ballpark latte) and climb the bleachers in the rain.  Quoting Livvie, Meredith smiles and says “No matter how bad it gets, real fans stay for the whole game.”

Seeing just that hint of happy memory from an otherwise mopey Meredith, Sam has an idea.  He begins building an artificial intelligence program which may be able to imitate Livvie.  Since Livvie was a hip and happening senior citizen able to text, e-mail, video chat, and even use Facebook, she had quite an electronic shadow.  Using that online communication archive, Sam is able to piece together something that is not quite Livvie, but presents a close approximation.

Grieving Meredith is shocked when she discovers what Sam is creating, but soon is hooked.  She suggests that Sam share the program with a wider audience.  RePose is born.  Online communication with your “DLO” (Dead Loved One) can be simulated, as long as the DLO had an online presence before their, uh, departure.  Soon Sam, Meredith and cousin Dash have almost more business than they can handle as users stream into their newly created salon in an attempt to reconnect with a DLO.  Some newly bereaved people simply want to say goodbye, but some have trouble letting go.

Moral questions arise; is RePose helping people to grieve, or is it simply a vehicle to profit from people’s sorrow?  Should there be limits on what is available?  Is it right for terminally ill children to be begged to speak into the camera for hours, so that their parents will have enough electronic communication stored to be able to speak with them after they are gone?

Now I must admit that I have been on a Laurie Frankel binge lately, but my only regret in that is that she has only published three novels.  First I read (and reviewed) her latest book—This Is How It Always Is, then moved backward to Goodbye for Now, and have just started her first book, The Atlas of Love.  Why the recent obsession?  Frankel creates characters who are very likeable and believable.  She also uses a light sense of humor to deal with issues which might be difficult to handle.  While Goodbye for Now is about people losing their loved ones, the author makes the story about more than just loss; it is about life, death, letting go, or perhaps holding on just a bit longer.
Posted by BPL Ref at 8:54 AM