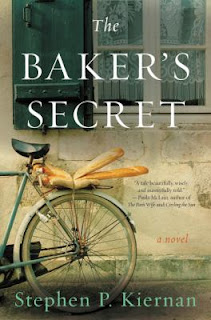 The Baker’s Secret by Stephen P. Kiernan is on the surface a story set in WWII occupied France about Emma, a young villager who bakes bread for the local German army commander. Every morning, she is supplied a ration of flour to make 12 loaves of bread. The baker’s secret is that the ration is mixed with ground straw to produce two extra loaves of bread that is then shared amongst the villagers. This small, yet very dangerous act steadily grows into an underground barter network of survival and dissent.

However, Emma is not the typical hope filled character some readers might expect.  She is a very practical woman who truly believes that the allies will never come. Her pragmatism is based on mere survival but her fellow villagers interpret her actions as hope for the future. In the end, The Baker’s Secret is a testament to the necessity of both hope and grueling sacrifice in the face of uncertainty.

The strength of the novel is in its many well rounded characters that capture the interest of the reader. Whether it is the wise and masculine veterinarian who leads the village resistance, the weaselly, traitorous and power hungry town clerk, or the young, cruel, and overconfident Nazi Captain Thalheim, all characters are easy to visualize and are purposeful.  It is much less about one cynical protagonist striving for the survival for her fellow villagers; it is a story about the human reality under military occupation.

The Baker’s Secret is the best novel I have read in years and I rate it as an instant classic. Stephen Kiernan is an award winning journalist of over 20 years and has written two previous novels, The Hummingbird and The Curiosity. His writing style is flawless. No word is wasted. Every sentence is crisp and concise and to the point without sacrificing imagery and descriptiveness. It was very easy to get immersed in the world Kiernan created, especially when he has the ability to produce well rounded characters or settings within one paragraph. An advanced reader would be able to read this full length novel in two sittings. I recommend this book to anyone interested in the human side of WWII occupations or well written literature.
Posted by BPL Ref at 9:00 AM