Playing for Pizza by John Grisham 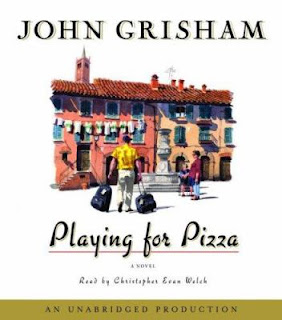 Rick Dockery isn’t the luckiest guy in the world.  After being transferred between teams numerous times and single-handedly costing the Browns the AFC Championship against the Denver Broncos, he’s currently the most hated player in pro-football and blacklisted from every American team.  But football is all Rick knows and he tells his agent, Arnie, he won’t settle for doing anything else.

Despite enormous odds against him, Arnie finds a team that will take Rick as a starting quarterback:  the mighty Panthers—of Parma, Italy, he adds.  With no other teams knocking at his door, Rick agrees to go to Italy to play for the Panthers, even if he doesn’t know a thing about Parma (or where it’s located) or speak a word of Italian.  Rick thinks the Panthers are just a pit stop, until he can get his career going again, but little does he know what Parma and the Panthers have in store for him.

Playing for Pizza was unexpectedly good.  Although I understood very little of the football plays—what is a third down, anyway?—or the jargon that goes along with the sport, I found I really enjoyed listening to Playing for Pizza.  It’s written well and it’s wonderfully narrated by Christopher Evan Welch; more to the point, it’s a rich, vibrant novel peppered with hints of humor.

Granted, it took me a few chapters to really settle into the story, but, once I did, I had so much fun listening to Rick Dockery’s story as he journeyed to Italy and officially became a Parma Panther.  I especially enjoyed Grisham’s descriptions of Italy—the art, the architecture, the culture and history, the romance (most of which comes courtesy of a secondary character from Georgia, who loved and adored all these things)—and, of course, the food.

I was almost always hungry while listening to Playing for Pizza.  Listening to the descriptions of fresh cheeses and wines from the countryside paired with delectable desserts and steaming bowls of pasta had me salivating from chapter to chapter.

Overall, Playing for Pizza was an excellent choice for my Read Harder Challenge and, honestly, it was just a lot of fun.  It’s entertaining, sweet and romantic, but it also doesn’t try to hide the bad things that sometimes happen in life and it doesn’t shy away from the tough choices people have to make; rather, it follows the ordeals of a rather ordinary person who finds himself in an extraordinary situation.  Moreover, while I did find aspects of it sweet and romantic, it didn’t border on too sweet or too romantic.

Playing for Pizza strikes a good balance.  It has an excellent story with an excellent narrator, and it has a little bit of everything for every reader.  I mean, if you don’t like romance, it has regular forays into Italian history and food and football; if you don’t like football, it still has Italy and food.  (Did I mention food?)  Personally, I’m not a huge fan of sports and I can’t understand football americano, but I will note that I enjoyed listening to the games as narrated by Christopher Evan Welch and, more importantly, I found it has much more to recommend it outside of the central football narrative.
Posted by BPL Ref at 4:06 PM