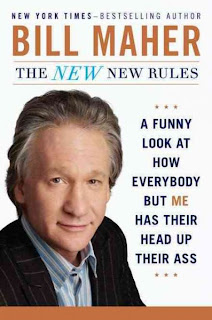 It is apparent from the outset that Bill Maher's ambition is to offend absolutely everybody possible within the pages of his book New New Rules: A Funny Look At How Everybody But ME Has Their Head Up Their Ass. Whatever your race, nationality, political party, weight, gender, sex, or religion, Mr. Maher will injure you and add insult to the injury before you turn the final page of his tome. If this world is made richer by the presence of individuals who don't hesitate to say exactly what they think whether or not it is kind or appropriate, Mr. Maher is certainly providing enrichment.

This reading is not for the faint of heart. There is a great deal of profanity laced with explicit sexual content.  If you are offended by bawdy swearing and bad attitude, do not get near this book. On the other hand, if you embrace irreverence, Bill Maher could be your guy.

If you aren't sure what Mr. Maher's political leanings are, it will not take you long to figure them out.

Actually, I am getting ahead of myself by reviewing New New Rules, because in 2005 Mr. Maher, political satirist and comedian, published New Rules: Polite Musings From  A Timid Observer. I thought this book was so hilarious I bought a copy. When I need a lift at home, I pause at the book shelf and read a rule or two. I guess now I need to buy a copy of New New Rules as well.

The author opines on subjects ranging from casinos, to James Bond Movies, to sex, to marriage, to politics, to schoolbooks in Texas (he says Lee Harvey Oswald was the last person to even notice that Texas has schoolbooks.)

On drugs, he writes: “I wish I had more time to go into the fact that the drug war has always been about keeping black men from voting by finding out what they’re addicted to and making it illegal.”Maher says that since the appearance of Rick Perry (remember him?) on the political scene, George Bush is now known in Texas as “the smart one.”

He also says, “This is the twenty-first century, at least in the blue states.”

The “rules” are laid out in an alphabetical format, and most of the “rules” are short and pithy. This is a book that makes me want to either laugh out loud or read out loud. If there’s no one around to read to I have to settle for laughing.
Posted by BPL Ref at 7:25 PM