Murder of the Bride by C.S. Challinor 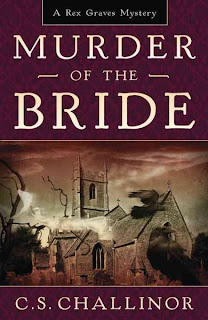 Rex Graves, a Scottish barrister, is attending a wedding at the behest of his fiancée, Helen. The dreary day doesn’t seem auspicious for a wedding, but even so one wouldn’t have expected a poisoned wedding cake.  Rex recognizes the symptoms as arsenic, and soon becomes involved in an investigation in which the how is easier to determine than who was the intended victim or victims or if the murders were a diversion to draw attention away from another crime.

This is the fifth book in the Rex Graves series, but the first one I’ve read.  The action moved along nicely and I enjoyed the puzzle.  There were a number of twists and turns, some good misdirection, and surprises awaited until almost the last page.  I didn’t get overly fond of any of the characters, though, and there were a few expressions that made me pause.  According to the author biography, Ms. Challinor received a degree from the University of Kent, so she is much more familiar with things British than I am, but some of the phrasing seemed American to me.  The solution was very clever, but I won’t say more for fear of spoiling someone else’s enjoyment.

From this book, I don't think it's a series that needs to be read in order.  There were a couple of references to past cases but nothing that made me feel I was missing something important if I hadn't read those books.  Another plus:  the author didn't give away the solution to the previous case, so I could still read that book without spoilers.

The Booklist starred review of the first book in the series, Christmas is Murder, described it as a game of Clue or an updating of a classic locked room novel, in which suspects are paraded in one by one and clever questioning reveals motives and murderer.  I would concur with that description.  Will I read others in the series?  Quite possibly, when I’m in the mood for a straight puzzle; but if I want to read about engaging characters, I’ll choose something else.
Posted by BPL Ref at 2:04 PM