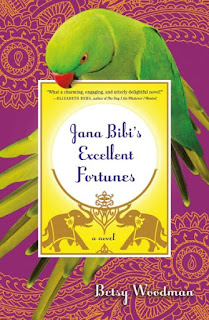 Janet Laird was a child of India.  Never mind that she was born to Scottish parents, or that there’s a family castle in Scotland:  India is her home. Since her husband’s death, she’s made a good living teaching violin to the children of a nawab, a nobleman; but the children are going away to school in Switzerland, and soon she’ll be out of a job.  Her son loves living the damp and drafty castle, and is anxious for her to come there to live. Much though she loves her son, the idea isn’t appealing.  Then she receives a letter from an attorney, informing her that she had inherited some property from her grandfather:  specifically, the Jolly Grant House, near Ramachandran’s Treasure Emporium and the Royal Tailors, in the small rural town Hamara Nagar.

Janet is thrilled.  She packs up her faithful housekeeper, Mary, and her parrot, Mr. Ganguly, and makes her way to the town. At first glance, things seem less than promising.  The house has been taken over by a gang of monkeys, and will need extensive repairs.  Janet also discovers the local police chief is a bully.  But the town is vibrant, warm, and friendly, and soon she is happily settled with a make-shift family.  Then word comes that the government intends to build a dam right where the town is located.  Is there any chance they can save Hamar Nagar?

The book’s intriguing title comes from part of the community plan to save the town.  They decide Hamara Nagar must become a tourist destination.  Janet opens a shop as “Jana Bibi,” a fortune-teller.  Mr. Ganguly acts as her assistant.

I found Jana Bibi's Excellent Fortunes to be utterly charming, delightful and entrancing.  I wanted to know what happened, but I also didn’t want the book to end. While the town and its inhabitants are idealized, author Betsy Woodman does let us know that there are some darker elements.  She just doesn’t let that aspect overtake the story.  This book reminds me not only of Alexander McCall Smith, but of the earlier Miss Read books:  mostly slices of life in a community where we know and like most of the characters, even the ones who frustrate us at times.  There’s Mr. Ramachandran, the effervescent owner of the Treasure Emporium; Feroze Ali Khan, the tailor who is grooming his nephew to take over the business;  Tilku, a street child, who more or less adopts Janet; Lal Bahadur Pun, a bagpipe wielding Gurkha; and most of all, Mr. Ganguly, a wise bird with a lot to say. Most of all, India herself is a character: a place of wonder, color, and beauty where cultures blend and mostly harmonize.  This is an author who knows and loves the place about which she writes.

After the story itself, Woodman includes a handy glossary of words and a wonderful section about the genesis of the book.  Woodman lived in India with her family for ten years, between the ages of six and sixteen.  She describes a bit of what life was like, which answered some of the questions I had about how authentic certain aspects might be.  She also commented on the origin of certain plot elements.

If you love books set in exotic locales that have memorable and delightful characters, then by all means give Jana Bibi a try.  The author’s website indicates that this is the first in a series, so I’m hoping I’ll be reading more of Jana Bibi and her friends.
Posted by BPL Ref at 9:58 AM