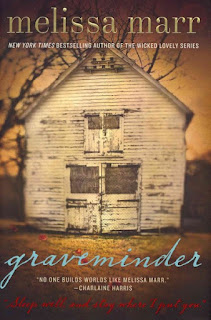 When Rebekkah Barrow was a little girl, her grandmother Maylene would take her on her rounds to visit the graveyards.  She always told her that the dead need certain things: prayers, tea and whiskey; memories, love, and letting go. She would take three sips from a flask and say, “Sleep well, and stay where I put you.”

It seems that in Claysville, graves do need minding or else the dead will rise, with horrific results. Let’s just say they aren’t called “The Hungry Dead” for nothing.  Traditionally, this task has fallen to the Graveminder, a woman from the Barrow family, along with the man chosen to be the Undertaker. Now something has gone terribly wrong: Maylene has been murdered and the dead are walking.  Rebekkah and her former lover, Byron, are called to assume their roles as Graveminder and Undertaker, but the two have no idea what they’re getting into, or the dark history on which their town is based.

Marr is best known for her YA horror novels such as Wicked Lovely.  This is her first foray into adult fiction and she does a credible job.  She’s created a very interesting world planted smack in the middle of our reality. It’s a little piece of the Twilight Zone where certain rules are born in the blood and those who leave Claysville will always be called back.  The book blends horror and romance to make an entertaining tale. I especially enjoyed the history behind Claysville and the descriptions of the place where “Mr. D” lives. I won’t go into further detail for fear of spoiling it for others, but it’s a very interesting world. I’m also glad to report that Marr kept graphic detail under control, letting imagination do the rest.

I liked the folkloric feel to it all, both in the history and in the rituals. Somehow the old superstitions still resonate more with me that the more modern pseudo-scientific explanations (i.e. mutant bunnies or alien invaders or government conspiracies.)

On negative side, I got a bit tired of the way Rebekkah kept turning Byron away repeatedly even after it became obvious they were going to have to work together. I understand her reluctance, but my tolerance for delaying the obviously inevitable has worn thin in novels, unless the reasons for the delay are a lot more inventive than they are here.

There are some intriguing storylines still to be told, if Marr is so inclined, both with Rebekkah and Byron or even some of the earlier Graveminders and Undertakers. I would be surprised if this doesn't turn into a series, given the obvious thought that's gone into creating this world.  I’d certainly be willing to read another book set there, either a continuation of Rebekkah's story or delving into the lives of previous Graveminders; there were some intriguing hints dropped by Mr. D.
Posted by BPL Ref at 9:38 AM