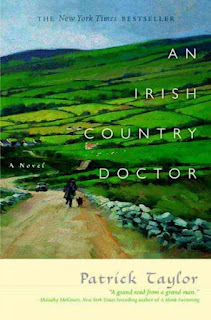 Ireland in the early 1960s is the setting for this delightful series of novels about the lives, loves, and ills of the good folk of Ballybucklebo in Ulster.  The story opens with Barry Laverty, a newly graduated doctor, on his way to the village for the first time.  He’s had an offer to work with the local physician, one Dr. Finagal Flahertie O’Reilly, with the possibility of joining him in the country practice.  The first meeting is not an auspicious one:  as Barry approaches the surgery, O’Reilly is tossing a man out bodily with the admonition to wash his feet before he calls again.

To Barry’s credit, he doesn’t use that introduction to flee—though he does consider it.  He soon becomes fascinated not only by the characters he encounters but the whole way of life.

I’d had this series on my TBR (To Be Read) list for quite some time and finally got around to it.  By the second chapter I was hooked.  The stories remind me very much of James Herriot’s work.  Like Herriot, Laverty is new to his trade, eager to show off his expertise in the latest medical techniques. It takes him some time to realize that people may not appreciate medical jargon or how other circumstances may factor into a patient’s diagnosis and treatment.  This bit of “fish out of water” situation gives the author an easy way to introduce the readers to Ballybucklebo as well. There are eccentric characters aplenty, including the woman who complains of headaches two inches above her head, the self-important local mayor,  Donal the schemer,  Alec Guinness the beer drinking dog, and the good-hearted housekeeper who keeps the household in line.

There’s a good bit of humor in the books, but they aren’t silly.  Some situations evoke pathos without pity or condensation.  Some of the medical scenes can be a bit graphic but never gratuitously so.  There’s a bit of creative cursing and some earthy comments which might offend some, but there’s such a basic sweetness and decency to the stories that most are able to overcome any offense.  In fact, for me the language was one of the draws, because Taylor seems to capture the rhythms of Irish speech and the colorful phrases so well.  It was a delight to read, so.  (And no, that’s not a misprint.  It’s a tribute to the wonderful Kinky Kincaid.) He includes a glossary of terms and phrases at the end of the book.  I haven’t really needed to consult it since most meanings are obvious from the context, but it does make for fun browsing. There are always some romantic subplots and some unpleasant character will get his comeuppance.

In some of his notes about the books, Taylor freely admits that he indulges in a bit of wishful thinking, in that he has both Protestants and Catholics living in harmony.  Taylor is also the author is Pray for Us Sinners, Now and in the Hour of Our Death, and Only Wounded:  Ulster Stories, all of which tackle the complex problems of “The Troubles.”

Taylor is Irish born and is a doctor; in fact, the stories began as a humor column in a medical journal. He now lives in British Columbia. 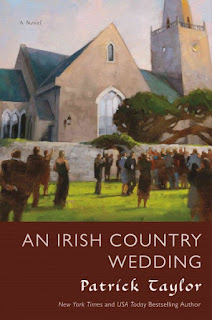 While you don’t have to read the series in strict order, it is fun to watch the characters adapt and grow a bit and it makes it meaningful when to encounter a character or two from an earlier book.  I’ve also enjoyed watching Taylor become more comfortable and confident in his role as author. I've just read the first three so far, as I was waiting for the fourth to be returned.  As I said, it's not necessary to read in order but I prefer to do so.  Here’s a list of the books in order:

Also, there are two books about characters at earlier points in their lives from the current series.  A Dublin Student Doctor is about Dr. O’Reilly as a young man when he was working in the slums of Dublin. While An Irish Country Girl explains the history of Kinky Kincaid, who began life as a farm girl in County Cork.
Posted by BPL Ref at 12:38 PM