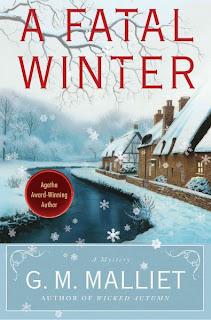 Oscar, Lord Footrustle, is estranged from most of his family save for his sister Leticia and her granddaughter who live with him in Chednow Castle—and even they aren’t on the warmest of terms.  He’s getting on in years, though, and he decides it’s time to call the relatives in so he can decide how to divvy up his fortune.  The Christmas holiday finds them all living uncomfortably together, including the much younger ex-wife who feels she didn’t get her fair share in the divorce, the aging aspiring actress daughter and her “writer” husband, and two somewhat shady nephews.  The awkward situation only gets more awkward when Oscar is murdered and Leticia found dead in the greenhouse, apparently of natural causes.

DCI Cotton knows this is a case which will draw a lot of attention and he very much wants to be the one to solve it.  He may not have all the means that would be at Scotland Yard’s disposal but he does have an ace in the hole:  Father Max Tudor, a former MI5 agent turned Anglican priest, who sorted out that other bad business a few months earlier.  He’s sure he can prevail on Max to do some snooping for him.

Max, on the other hand, is trying to calm his household which has been invaded by Luther, the church cat, who’s had to be relocated due to the decorative greenery installed for the holidays. Luther and Thea, Max’s faithful canine companion, are getting along like a balloon and a cactus. Max is also becoming await that he’s forming what Jane Marple would have termed “a most unsuitable attachment,” so getting out of the parish for a few days is probably a good thing.  Besides, Lord Footrustle and his sister are to be buried in Max’s church, so it’s only proper he should consult and offer comfort to the bereaved—if he can find any bereaved, that is.  Most seem only too pleased to be rid of both Oscar and Leticia.

A Fatal Winter by G. M. Malliet is the second in the delightful “Max Tudor Mystery” series, and while it's sometimes hard to follow a great debut, I'm happy to say that the sequel is just as good.   I praised Wicked Autumn for its humor, which still very much present in this book but isn’t quite as pronounced.  The characters were interesting and the resolution was clever.  It seemed to me that the characters were a bit better developed this time around, and I enjoyed the conclusion very much.  She puts a fresh spin on the English village mystery, retaining the charm while modernizing the concept. There’s even the occasional curse.

There’s a lovely map of the village, a helpful genealogy chart to keep track of relatives, and a brief list of characters. I’m looking forward to the next book in the series.

Malliet is an American who lived in England for a time.