The Chocolate Cobweb by Charlotte Armstrong 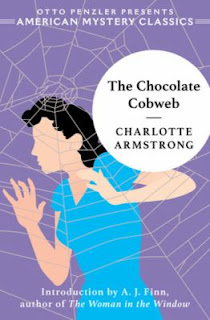 Amanda “Mandy” Garth is a charming young woman with artistic talent, something she apparently didn’t inherit from either of her parents.  While admiring one of famous artist Tobias Garrison’s paintings, Cousin Edna blurts out that Amanda was nearly given to Garrison as a newborn.  She was born at the same hospital and at about the same time as Garrison’s son, and a nurse confused the two infants.  Of course, there is really no question that that Mandy is her parents’ child, but she sees it as a chance to introduce herself to the artist. Her tactics work, and she soon finds herself at the Garrison canyon home where she is welcomed by Tobias.  His wife seems gracious, but his son Thone is definitely cool to her.

And then Mandy sees something that makes her believe someone in the house may be about to commit a murder.  The problem will be getting anyone to believe her long enough to stop the murderer from succeeding.  The fact that she uses the tenuous excuse of being an exchanged child certainly doesn’t earn her any points from most those concerned; she comes off to them as someone who is angling for something.

First published in 1948, The Chocolate Cobweb doesn’t seem to be particularly dated, except for the lack of cell phones.  It’s also not as darkly written as the current domestic noirs (think Gone Girl by Gillian Flynn or The Girl on the Train by Paula Hawkins) but there is real danger here.  Mandy is one of those heroines who is determined to see a thing through, no matter how much she is dissuaded.  She knows that she is hurting people around her, but she just can’t bear to stand by and do nothing.  The lightness of the writing makes the dark deeds seem all the more surprising.

Much of the story revolves around color, and I think that’s why I enjoyed it so much.  As a would-be artist, Mandy is aware of the emotional connections color makes.  There are descriptions of Tobias’ portraits and Mandy’s own compositions that made me wish to see a photo, but alas they are just part of the author’s imagination.

Which is why I have to say the cover of this recently republished edition is a bit disappointing.  I’m probably the only one who would think that and I only thought it after I read the book; before, I thought the cover was fine.  (Also in Goodreads I saw the cover of an earlier edition which was awash with color.) It’s not a bad cover and probably more appealing to a modern audience but I really liked the other for its relationship to the content.

The murderer is quickly identified to the reader, but I still will refrain from revealing it in this review.  Suffice it to say that the person is cunning and ruthless, more so than Mandy realizes—and that is where the danger lies.

If you like the classic mysteries of the mid-twentieth century, give The Chocolate Cobweb a try.