All Systems Red by Martha Wells 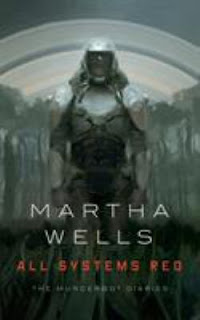 In All Systems Red, Martha Wells introduces her readers to “Murderbot,” a self-aware security android – or Sec Unit – which has learned how to hack its own governor module and selectively obey orders.  For the most part, Murderbot covertly downloads media (it’s a big fan of a space soap opera called Sanctuary Moon), pretends it hasn’t gone completely rogue, and spends its days tuning out its human charges.

For the most part, its humans are pretty boring.  As a SecUnit created and commanded by the Company, it’s met worse humans – much, much worse – and its faced worse jobs.  Protecting a handful of scientists conducting surface tests on a new planet is pretty easy.  Until, one day, a neighing mission goes dark and Murderbot discovers that someone is attempting to sabotage its mission and kill its humans.

Not that it cares.  Much.

I absolutely loved listening to All Systems Red.  I picked it up as an audiobook on Tennessee READS, and I think I listened to it in one day.  It’s not a long book – more like a novella, than a full-length novel – but it’s packed with tons of adventure, android angst, and humor.  Kevin R. Free narrates the audiobook version, and he does an excellent job of conveying Murderbot’s general antipathy toward humans.

Despite its grim moniker – that Murderbot bit is privileged information – Murderbot isn’t particularly motivated to commit capital offenses.  It would rather covertly download and consume vast quantities of media, while pretty much ignoring the scientists it’s being forced to guard.  “As a heartless killing machine, I was a terrible failure,” it admits.

Although Murderbot is surely the star of the show, I found myself enjoying Mensah, too.  Mensah is the captain of the expedition.  She’s a scientist, but she’s one of those with a small streak of Indiana Jones in her DNA – just enough to make her feel a little like an action hero.  She’s smart, she’s commanding, and she’s very, very good at her job.

As Murderbot grew to appreciate her, I also found myself enjoying its interactions with Mensah and the rest of the crew of PreservationAux.

One of the main things I loved about Murderbot was the fact that it wasn’t some cold, calculating, perfect robotic entity.  It was flawed – very flawed.  I mean, I’ve never imagined an android could have social anxiety, so it was very enlightening and it made for some very funny lines that I just adored, like:

“Yes, talk to Murderbot about its feelings.  The idea was so painful I dropped to 97 percent efficiency.  I’d rather climb back into the Hostile One’s mouth.”

“They were all so nice and it was just excruciating.  I was never taking off the helmet again.”

As an introvert who occasionally – admittedly, often – dreads social situations, I felt Murderbot’s plight deep in my bones.  I also laughed so hard I snorted.

Overall, I enjoyed All Systems Red immensely.  It’s probably one of my favorite science fiction novels – right up there with The Martian by Andy Weir and The Long Way to a Small, Angry Planet by Becky Chambers – and it’s definitely in my top ten books for the year.  I loved reading about Murderbot, and I can’t wait to continue reading about its further misadventures.

All Systems Red is the first in a series titled “The Murderbot Diaries.”  It’s followed by: