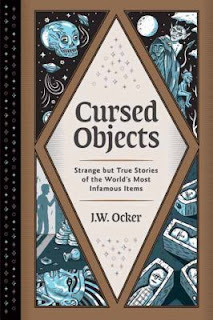 Cursed Objects: Strange but True Stories of the World’s Most Infamous Items by J.W. Ocker

Author J.W. Ocker likes to chronicle his strange finds during his travels, and sometimes he travels solely in search of strange finds. In Cursed Objects, he catalogs a variety of ordinary artifacts with extraordinary backstories.

Ocker covers objects from the original Annabelle doll (as well as Robert the Doll) to the tomb of Tutankhamen and many things in between.  He even touches briefly on those who curate such items like infamous paranormal investigators Ed and Lorraine Warren or Ghost Adventures’ Zak Bagans and his Haunted Museum. Each entry includes a little bit of a history lesson as well as tragic incidents to back up the “cursed” claims. Although I enjoyed reading about the Hope Diamond and the Dybbuk Box, one of my favorite entries was on an item I had never heard of before: the Prague astronomical clock. First installed in 1410, this clock is the oldest astronomical clock still in operation. As the legend goes, the townspeople found the clock so beautiful that they gouged out the clockmaker’s eyes so he wouldn’t be able to replicate his creation in other towns. Thus giving birth to the curse. If the clock goes too long without working, the city will suffer.

This book was a fun and very light read. It was a fairly superficial dive into the world of cursed objects and felt similar to a more extensive Buzzfeed list on the topic. Some objects’ inclusion made little sense. The Antikythera mechanism (described as the first analog computer) is a fascinating and mysterious artifact but even the author admits that there are no stories of a curse surrounding it. So why was it included? Regardless, Ocker’s writing is witty and conversational without seeming forced. If you’re in the mood for an entertaining, listicle-type of book, Cursed Objects is not a bad choice. I would just recommend keeping your phone nearby in case you’re tempted to Google image search every single item like I was.