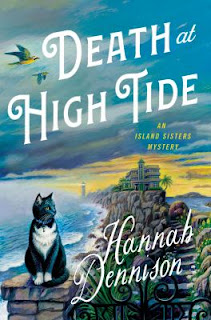 After Evie's husband Robert dies suddenly, she discovers they were in deep financial difficulty. Even her home is in jeopardy. When Nigel, Robert's solicitor, offers a flicker of hope in the form of a loan with an island hotel as collateral, Evie and her California-based sister Margot head to the remote island off the coast of Cornwall to check things out.

This proves more difficult than expected when the hotel owner claims not to know Robert and that no such loan was ever made.  In order to win cooperation, Margot claims she is scouting a location for a movie, much to Evie’s chagrin.  Things soon take a darker turn when a murder occurs.

The setting takes a star turn in this book.  The island is reachable only by ferry, giving the place a wild yet claustrophobic feel.  The hotel, far from being the glamorous spa of the imagination, is badly in need of repairs.  The islanders aren’t exactly a great welcoming committee either.  There are a lot of secrets to be untangled, and not just the murderer’s identity.

Evie is still a bit bewildered by her sudden widowhood, but she is made of pretty stern stuff.  I was less fond of Margot, whose wild lies rather got on my nerves, especially when it seemed pretty obvious that few were taken in by them.  There is indeed a cat, as promised by the cover, who communicates with selected humans and is a good source of information—if you believe in feline witnesses.  One of my favorite characters was the island’s police officer, who seemed to be both capable and to view the sisters with a bit of an amused eye.

This is a first in series book, so I think things will smooth out since at least some of the characters have been introduced.  While both Evie and Margot are British and the story is based in the UK, it read oddly like an American cozy to me.  That’s not necessarily a bad thing, just not quite what I expected. I’ll be interested to see what happens in the next Island Sisters Mystery book.