The System: The Glory and Scandal of Big Time College Football by Jeff Benedict and Armen Keteyian 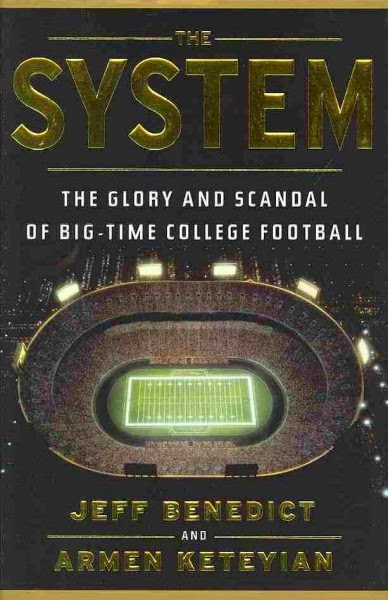 I have learned to enjoy college football.  At first it was just so that I could contribute more to family conversations than, “How ‘bout them (insert name of mascot here)?”  Through relatives and friends, I have ties to most of the SEC schools so family viewing can sometimes get a bit heated. My critique of the game is still largely limited to “GO! GO! GO!” or “GET HIM, GET HIM, GET HIM!”   Also, I have finally figured out what a first down is.

Recently, I’ve come to wonder a bit more about how the whole college football thing works—I mean, REALLY works.  I’m not the only one, judging from the recent flurry of articles and books which raise questions about every aspect of the game, from injuries to injustices, from felonies to fame. In The System, I found a book which covers most of the subjects in a highly readable, informative way.  While I wouldn’t call the book a scathing indictment—the authors recognize the energy and excitement college ball creates-- it does raise a number of troubling questions.

Several chapters deal with the career of Coach Mike Leach, whose story is an instructive look at the careers of college coaches in general.  I didn’t know anything about Leach, but his story is a dramatic one:  a winning coach who is accused of player abuse, fired, and then is considered for another high profile job. His career arc is scattered throughout the book in different chapters, which was an effective way of telling the story.  In fact, the entire book tends to use individual stories to illustrate problems, concerns, and triumphs, so that the result is very readable and immediate.  As a casual fan, I had no idea that most colleges use female college students to entice potential football recruits to commit to their college; nor did I have any idea of the scope of the boosters who funnel money to star players under various guises.  In fact, the entire recruiting process was an eye-opener.  One chapter details how T. Boone Pickens was encouraged to donate $165 million to Oklahoma State and the result of that particular investment.  Another described an assistant whose job it is to ensure that the players keep out of trouble, down to checking about a pretty young woman who was staying at the same hotel as the team—was she really just a guest or was she a decoy for an NFL scout? Another chapter that surprised me had to do with the mechanics of firing and hiring a coach, which apparently is not usually the swift and sudden process headlines would have you believe.  And how about all those little schools who appear on the schedule of the heavyweight college teams—is it worth it for them to be little more than “score fodder”?

The authors make every effort to give all the people involved a chance to speak from his or her perspective, and they refrain from the subtle editorializing common to this sort of book such describing people in an unflattering manner. Everyone is treated with respect though not deference.

While the authors obviously love the game, they bring up a number of questions that need answers—and they aren’t the only ones asking.  A recent cover story from Time Magazine asked if it was time to pay college athletes, while the documentary “League of Denial” has highlighted the dangers of concussion in NFL players.

Honestly, when I picked up The System, I thought I would read maybe a chapter or two at most, and then abandon the book.  Instead, I was fascinated.  It’s certainly changed my perspective when I read sports headlines.  This is especially true because of the timeliness of the book:  many of these players and coaches are all still active and still making news, like Mike Leach and Nick Saban.  I’m watching the unfolding of the University of Texas’s firing and hiring of a coach with more interest than I thought I would ever muster, now that I know who Mack Brown is and have an idea of the power of boosters.   Tennessee fans will be especially interested on the chapter with Lane Kiffin.

In short, this is a book which will interest a variety of readers, not just real college football fans who know what a touchback is.  (No, don’t tell me. I’m enjoying the mystery.)
Posted by BPL Ref at 10:12 AM