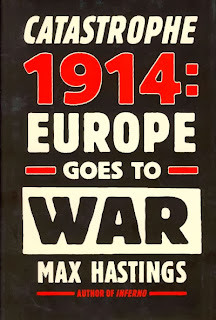 The year 2014 is at hand.  And all Europe will observe the centennial.  Note that we do not say celebrate. For 2014 marks the 100th anniversary of the coming of World War I, an event so catastrophic in the history of Western civilization that it is almost beyond exaggeration.

The story is admirably told in a newly published book, Catastrophe 1914: Europe Goes to War; its author is Max Hastings, an eminent British historian of the first rank.  It is an account that should be read by anyone seriously seeking an understanding of our contemporary history.

Basically it is a story of diplomatic failure, for virtually none of the European nations who rushed to arms that August wanted a continent-wide conflagration.  They rightly feared Europe might be thrown back into another Middle Ages.  “The lamps are going out all over Europe,” warned British Foreign Secretary Sir Edward Grey, “and we shall not see them lit again in our lifetime.”  And the consequences of that war were many.  If conflict could have been avoided in 1914 Adolf Hitler would have remained an unknown painter of no reputation.  The word Nazism would never have entered our dictionaries.  Russia would probably would have avoided a Communist  revolution, and almost  certainly that would have forestalled any Communist revolution in China, to say nothing of elsewhere around the world.  The present Arab-Israeli conflict that disturbs peace in the Near East might never have come about, and the development of the atomic bomb and a nuclear arms race might never have occurred. The list of consequences goes on and on and on.

So if you ask why did European diplomacy fail so badly in 1914, you must read this book, for it is a complete and absorbing recital of the events.  It’s a long account  - 600 pages – but you should read it all for the devil is in the details.  They called it the “Great War” back in 1914, for they were unaware that its outcome would spawn a second and even more horrendous conflict two decades later.  All in all you cannot understand our contemporary world situation without giving your regards to the impact of World War I.  May we all resolve to be wiser in this centennial year!
Posted by BPL Ref at 10:43 AM