Lost States: True Stories of Texlahoma, Transylvania, and Other States That Never Made It by Michael J. Trinklein 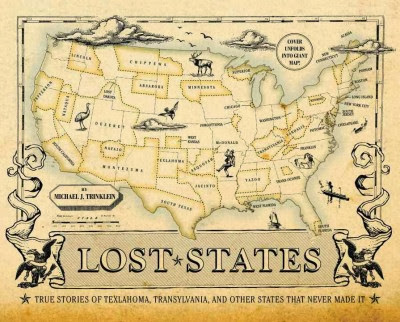 Did you ever stop to think what the United States may have looked like if certain fringe (or not-so-fringe) groups had their way?  Many readers are old enough to remember the days before Alaska and Hawaii were granted statehood in 1959.  Without those two latecomers, we would have a very different map.  Most people living in the Tri-Cities are familiar with the failed state of Franklin just to our south.  If the people of Franklin had not been so high minded and tried to run their rogue state without levying any taxes, they might have been able to raise a militia and maintain a strong presence.  Lost States recounts many similar proposals for divvying up the land in the United States.  In many cases, the people living on the land simply wanted to be self-governing.  In other cases, sometimes there was just a bit of land leftover that no one claimed.  For every proposed state featured here, the author writes a short history laced with humor and backed by research.

As recently as 2005, Maine was thinking of splitting itself into two parts.  The proposed northern “Acadia” encompassed the more rough-and-tumble forested mountains.  The southern, coastal area tends to cater more to summertime tourists.  So which is the “main” Maine?  Who knows, but a future split is always possible.

Big cities have little in common with the rural parts of the states they share.  Several cities have proposed sovereignty in order to protect tax monies, or to make a bid for more representation in Congress.  In 1919, Massachusetts State Representative James H. Brennan argued that Boston should be a separate state, on the basis that the city was pouring $600,000 into the education system that would benefit the more rural schools.

Look at oddly shaped Maryland on the map.  The narrowest part of the western section is only two miles wide, and the eastern side is divided by almost more water than there is land: Chesapeake Bay.  Tax arguments abound between western and eastern Maryland.  Another proposal is to create a state from the Delmarva peninsula--land shared by Delaware, Maryland and two disconnected counties in Virginia.  With all that prime oceanfront property, each state seems determined to hold onto every inch of land.

In 1925, after a huge population boom, Chicago politicians were not too happy to have the bulk of the legislature controlled by the farmers downstate.  But similar to Boston, the division discussion died down pretty quickly.  The author suggests that perhaps the Chicago Mafia got lost in the corn fields as they went to Springfield to show the farmers who was boss.

In 1898, at the end of the Spanish-American War, Cuba had the possibility of becoming a state as it was relinquished by Spain.  Instead, Cuba was given independence, which might have been a big mistake.  If Cuba had been an American state, Fidel Castro would not have gained power and caused the worldwide stress of the Cuban Missile Crisis in 1962.

Several proposals were made to divide the Dakota Territory.  After slicing off Montana, Idaho, and Wyoming, moving on to what has become North and South Dakota, we could have had states named (one big) Dakota; West Dakota and East Dakota; Dakota and South Dakota; or even Pembina and Dakota.  (Whew, I’m confused even while looking at the map!)  A small patch that was leftover far away from the remaining Dakotas became Lost Dakota.  Eventually, Lost Dakota was attached to Montana, but is still undeveloped forestland today.

The North Slope of Alaska, South Jersey, Transylvania, South Texas, West Florida, Yazoo, Montezuma, even Sicily--yes, the Italian Sicily!—all of these are areas which might have or might still become states.  If all proposed border changes had been approved over the course of our nation’s history, schoolchildren would be learning the capitals of well over 100 states.  If this sounds interesting, take a jaunt into what might have been with Lost States.
Posted by BPL Ref at 8:48 AM