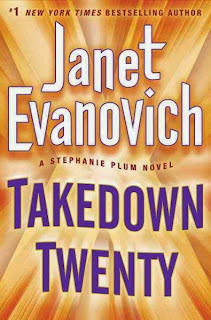 I remember the good old days, when Stephanie Plum made me laugh out loud at least every few pages.  Sadly, those days are over.  Janet Evanovich’s latest books in the Plum series feel like there are large portions copied and pasted from previous books.  Stephanie is still frustrated by her ineptitude as a bounty hunter, still thinking about marrying Joe, still getting the evil eye from Joe’s Grandma Bella, still thinking about hopping back into bed with Ranger, still going to Cluck-in-a-Bucket with Lula, and still destroying at least one vehicle per book.

But hope springs eternal, as is shown by the fact that I (and many others) keep reading this series.

In this twentieth installment, Stephanie starts out searching for fugitive mobster Salvatore “Uncle Sunny” Sunucchi.  Unfortunately for Stephanie, Uncle Sunny has close ties to the Morelli family.  He is Joe’s godfather and a favorite nephew of Grandma Bella.  Dapper Uncle Sunny has quite a few loyal friends and family who keep him hidden as Stephanie and Lula stumble around trying to apprehend him.

Ranger also asks for Stephanie’s help this time around, as he is investigating the death of Melvina Gillian, a Burg senior citizen who was found in a dumpster.  Stephanie digs into the happenings at the senior center, online bingo sites, and the local funeral home in order to find out who might be killing a string of old ladies.

Zaniness rules in the Plum series, with a giraffe running around, first appearing on page two.  Right along with the giraffe sighting, Lula decides that she must have a genuine Brahmin purse being sold for ten dollars on the side of the road.  Back at the bail bonds office, Connie very helpfully points out that it is a Brakmin bag, but Lula is not bothered by the misspelling.  After one too many failed captures, Lula and Stephanie both consider a change of profession, Lula musing about going back to her old street corner, and Stephanie working a very short and nauseated shift in the butcher shop.

Stephanie continues the see-sawing back and forth between Ranger and Joe.  Unfortunately, in this volume, we don’t see a lot of action or even much depth of character from the men.  Joe says “Cupcake.” Ranger says “Babe.” And that’s about it.

Amazingly, Stephanie doesn’t destroy a vehicle until the twenty-second chapter.  I was starting to think Stephanie would get all the way through with all vehicles intact.  (I should have known better.)

If you are a die-hard Plum fan, then you will probably enjoy this latest outing.  I think the closest I came to a laugh out loud moment was when Grandma Mazur started talking about her new lavender thong and the effect on her new boyfriend.  Yes, sophomoric humor at best, but sometimes that’s all we need: a light, fluffy and predictable read.
Posted by BPL Ref at 12:48 PM