The Little Bookstore of Big Stone Gap by Wendy Welch 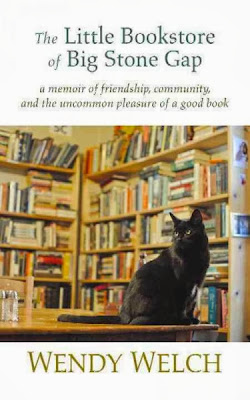 Reviewed by Jeanne
As many times as this book has been mentioned in the Nevermore Book Club, I was surprised to realize that we’ve never done a full review of it.  Possibly this is because it took me such a long time to get to read it in full:  I began reading it several times, but then a patron would ask about the book and I’d surrender it.

Wendy Welch and her Scottish husband, Jack Beck, followed a job opportunity to southwest Virginia.  Both had daydreamed about owning a little bookstore in an old house, where they could interact with other readers, introducing people to their favorite books and finding new ones, and be a part of a community.  When the job turned out to be more of a nightmare than a dream, they began to contemplate making a change.  That’s when they fell into the trap:  they saw the Edwardian style house in Big Stone Gap for sale.  It was the physical manifestation of that bookstore they’d built in their imagination.  All it needed was the courage to make the leap and turn it into a bookstore.

Well, courage, along with a large number of repairs, books for people to buy, learning how to run a bookstore, and living expenses  while they got this venture off the ground—if they could get it off the ground.

There was also the little problem of being outsiders in a small rural town and opening, of all things, a bookstore in a place where no bookstore had ever been. They were regarded with more than a little suspicion, and even those who applauded their idea of a bookstore were privately taking bets how long it would take Jack and Wendy to pack up and leave town.

The townsfolk hadn’t reckoned with two very determined people.  This is the story of how they learned their trade, survived their mistakes, and became an integral part of the town.  As with most books, it’s the characters that make the story, from Jack and Wendy themselves to the bookstore cats.  There are stories I’ll carry with me from the book, such as the story of Wee Willie, the older gentleman who always bought Westerns and who talked non-stop, and the saga of the missing kitty, Chunky Monkey.  (Spoiler alert: he is found.)

It’s warm, amusing, insightful, thoughtful, and just a fun book to read.  It also makes one want to plan a trip to Big Stone Gap to meet Wendy, Jack, and the other denizens of the Tales of the Lonesome Pine Bookstore.

(Note:  The large print version of the book features the one and only Val-Kyttie on the cover, the bookstore cat who doesn't suffer fools --or anyone else, for that matter--gladly.  It's no surprise which cover I'd choose for this review!  To be fair, I'm including the more usual cover below.) 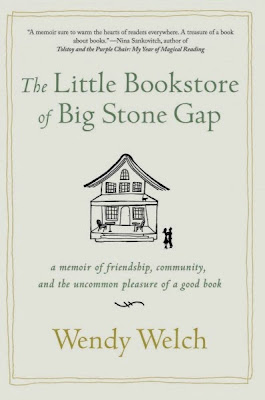