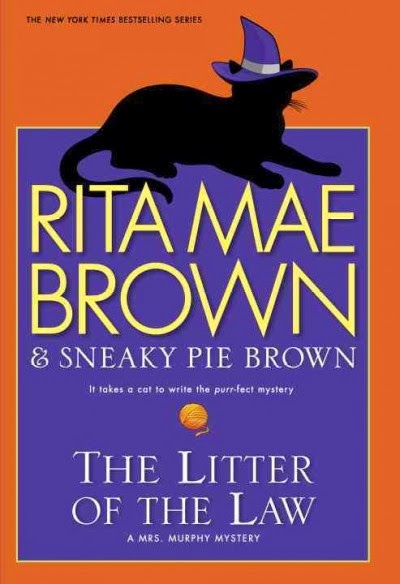 Sneaky Pie Brown is at the typewriter again, with only a little help from her human, and perhaps from that pesky gray fluff-ball, Pewter.  Fans of the series must suspend their disbelief about talking animals, and jump right into the central Virginia world where the animals are much more observant than the humans.  While the plots are moved along by hints from tiger cat Mrs. Murphy, plus-sized Pewter, and corgi Tucker, the humans actually do play a big part in figuring out “whodunit” in this mystery series.  Starting with Wish You Were Here in 1990, the Mrs. Murphy series has grown to twenty-two volumes, with the twenty-third (Nine Lives to Die) due out in June 2014.

Halloween is approaching and members of the Crozet community are preparing for the Halloween Hayride to raise money for the local library.  Mary Minor “Harry” Haristeen and her veterinarian husband Fair stop by a local vegetable and fruit stand and promptly discover a scarecrow covered in crows.  A human scarecrow, that is.  This disturbing discovery happens in the first chapter, so I’m not giving too much away.  Unfortunately, more crimes are committed in the course of this book.  Fortunately, the animals are on the case as well as the humans.  Birds, foxes, mice, and even the local opossum gladly chat with Mrs. Murphy, Pewter and Tucker, giving them a heads-up on what other animals and humans are doing.

Brown (Rita Mae, that is) lives and writes in central Virginia.  Her political views do show through in her writing, on such matters as Native American tribal recognition, government subsidized crop insurance, and organic farming.  While not too terribly preachy, characters in her books definitely have opinions on those matters and are not afraid to share them in conversations.  Brown writes many strong female characters, but includes their faithful and honest male counterparts as well.  The recurring characters are obviously part of a community whose members take care of each other.  A cast of characters is provided at the beginning of each book, which can be helpful in setting the scene for the newest adventure.

The animals (or “The Really Important Characters”) do have dialogue with each other, indicated by italics in the text.  Some reviewers have found this slightly annoying, but I think that it’s done gently enough to be believable.  I believe my own cats communicate with each other, although I doubt they stoop so low as to think in human language.  Another odd thing--I’m still puzzling over why this book was entitled The Litter of the Law.  Obviously “litter” is related to animal litters, but I think perhaps the author or publisher has simply reached a little too far for a pun-filled title.  Puns aside, I still enjoy this series and will look forward to seeing Mrs. Murphy, Pewter and Tucker in future adventures.