A Study in Emerald by Neil Gaiman and Rafael Albuquerque 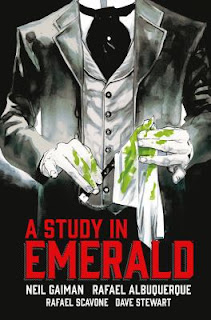 Defined as a cross between the world of Sherlock Holmes and the mythos of Lovecraft’s Cthulhu, A Study in Emerald follows the story of a man known only as “The Major.”  He meets London’s most brilliant detective and finds himself embroiled in solving a horrific murder – one with consequences that will ripple across the entire country and bring the full power of the throne to bear.

I’ve heard of A Study in Emerald.  I recall first hearing about it – or hearing of it, at least – a few years ago when Neil Gaiman responded to a Twitter thread about fanfiction.  The original poster, of course, didn’t like it; Gaiman, on the other hand, defended it.  “I won the Hugo Award for a piece of Sherlock Holmes/H.P. Lovecraft fanfiction, so I’m in favour,” he wrote.

So, I’ve known about A Study in Emerald for a few years without ever really knowing its title or its plot.  Mostly, I just knew that it existed, out there in the ether, maybe on the Internet or on a bookshelf.  It was somewhere – and then I stumbled across it on my library website and thought, “Oh, there it is.”

And then I promptly borrowed it.

A Study in Emerald was, truthfully, not what I anticipated.  It’s a mixture of mystery, horror, and weirdness that I can’t even begin to describe, but it’s beautifully illustrated and it’s very well-written and it’s absolutely fascinating.  If features characters known only as “The Detective” and “The Major” – a Sherlock and Watson substitute – who share a curiously similar dynamic to the original duo; however, they are individuals who have lived under the thumb of Cthulhu-esque rulers and so their demeanor is decidedly different.

A Study in Emerald features all the twists and turns one expects from Sir Arthur Conan Doyle, but with the flair – and curiously twisted imagination – one also expects from Neil Gaiman.  The Cthulhu mythos was an interesting element in the story.  I know only a little about Lovecraft and his writing, but, luckily for me, I didn’t have to know much to enjoy reading.

One of my favorite aspects from the illustrated version of A Study in Emerald were the chapter dividers.  It was a simple page between each section of the book that featured advertisements for Victorian era cures, treatments, and commodities, but given a slight twist.  For example, you have shoes from Spring Heel Jack or powders from Henry Jekyll or alternative medical treatments from V. Tepes.  I thought they were neatly done and very clever.

Overall, A Study in Emerald is an interesting – and, let’s be honest, weird – graphic novel.  Truthfully, I’m still processing my feelings about it, but I find that’s usually the way I feel about most books by Gaiman.  My initial feelings are always conflicted:  clear confusion – I’m not certain I like this, but I kind of do?  I mean, do I really like it? – followed by a deep, abiding appreciation for his work.

It usually takes me a few moments to collect my thoughts and realize how much I actually enjoyed the experience, because, truly, reading a novel by Gaiman is a completely unique experience.  His work, A Study in Emerald included, needs to be savored and chewed on, before one can really appreciate the twists and the weirdness and the sheer originality.