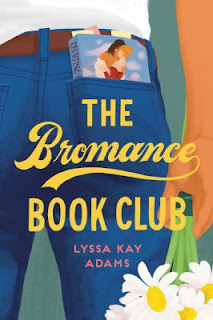 Gavin Scott is second baseman for the Nashville Legends.  His career is at an all-time high, he has a beautiful wife and two wonderful daughters, and he couldn’t be happier – except it turns out things aren’t so great in paradise.  After a devastating argument, Gavin’s wife, Thea, asks for a divorce.  She’s done with lying to keep him happy and she’s finished putting herself last in their relationship.  Suddenly, Gavin is desperate to try anything to win back his wife’s heart – even if it means joining the Bromance Book Club.

I enjoyed The Bromance Book Club.  It’s a fun and funny romantic comedy with a twist, and it introduces such an interesting – and adorable – cast of characters.  I really liked the idea of a “bromance book club,” wherein the guys read (and, yes, enjoy) romance novels and, you know, learn to engage with other people and their significant others in healthy ways.  It was a novel concept to meet male characters in a book, who were willing to admit that they’d screwed up and actually learned that “grand gestures” just weren’t going to cut it anymore.

Granted, I wasn’t much of a fan of Gavin even at the end; however, I appreciated his development as a character and his willingness to try to be better for Thea and his daughters.  He wasn’t the quintessential alpha male jerk; instead, he was just a very flawed man with a little too much pride, who learned how to fix the relationship he helped break.

Overall, it was an enjoyable read with fun characters and a sweet ending.