The Echo Wife by Sarah Gailey 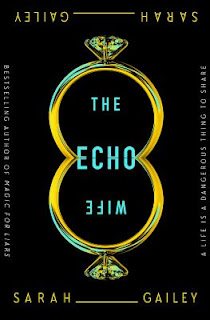 Evelyn is a renowned and award-winning scientist, known for her groundbreaking work in creating genetically cloned replicas of humans. She's so immersed in her work that, at first, she doesn't even realize her husband Nathan is cheating on her. The betrayal stings even more when she discovers he is having an affair with her clone.
Nathan, also a scientist, has used Evelyn's own work to create his Perfect Wife. Martine is unlike Evelyn in every way: she's warm, patient, and unquestioning. She also wants to be a mother. Evelyn is utterly blindsided by this turn of events but deals with it the best way she can. By drinking wine and throwing herself even deeper into her work. She certainly has no intention of learning anything about Martine as a person. But then one night Martine calls her in a panic. She needs Evelyn's help. Because Nathan is dead.
This is probably one of the most intriguing premises I've ever read, and I couldn't wait to dive into this twist on the domestic thriller. I'm normally not a big sci-fi person but this had a small amount which was just enough to add a little spice to one of my favorite genres. Unfortunately, and I really hate to say it, it left me a little underwhelmed.
There were definitely some good, twisty moments but overall I was a little disappointed. I don't know if it was because I felt like something more should happen or if I just didn't connect much with the characters. And there's certainly something to be said about societal expectations of wives but I felt like that aspect wasn't as fully fleshed out as it could've been. I think the novel as a whole just could've been meatier.
All that to say, it's not a bad book. I didn't hate it. But I never felt any particular way about the characters or a sense of urgency while reading. I don't know that I could recommend this book but I am interested in what others who have read it think of it.