The Woman’s Hour: The Great Fight to Win the Vote by Elaine Weiss 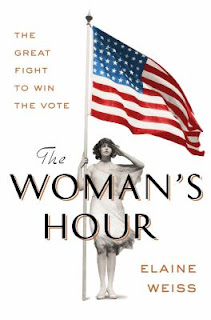 Reviewed by Christy
The Woman’s Hour opens with several female activists, some suffragists and some anti, on a train headed to Nashville, Tennessee in August of 1920. Thirty five states have already ratified the 19th Amendment, finally granting women the right to vote. Only one more state is needed to officially make it the law of the land.
Focusing on the leaders of their respective movements, Weiss bounces back and forth between the showdown in Tennessee and the history of the suffrage movement in general. Because of this, The Woman’s Hour feels very scattered at times. Naturally there are many players that helped usher in a new era of women’s rights, and with so many names and time jumping, at times it was difficult to keep track. But to be fair, I was listening to this as an audio book which could have contributed to that fact.
Weiss has a done a lot of research, and it’s obvious she deeply cares about this topic. However, the text can be a little dry, and I found my mind wandering at times. But despite that, I do think this is well worth a read. It’s interesting to hear the arguments against suffrage, many of which came from women. Anti-suffrage women railed against allowing women into the political sphere while they themselves entered the political sphere to promote their cause. Weiss digs into the dirty tricks and bribery, including plying politicians with illegal liquor, that was deployed to gain favor.
Weiss also doesn’t shy away from showing the severe faults within the suffrage movement itself. There were fractured organizations that disagreed on tactics and refused to cooperate with one another. The movement also displayed overwhelming racism against black women. Though many black women tried to join alongside white women, they were often relegated to the sidelines or, quite literally in the case of parades, the back of the line. Anti-suffrage activists used the idea of black women voting as a scare tactic for what could possibly happen. Suffragists tried their best to assuage fears and assure their supporters that this would not happen. It’s a nasty part of the suffrage legacy but one that must be addressed.
Weiss’ work shines brightest during the court room scenes. Even though I already knew what was going to happen, these scenes really ramped up the tension and put me on the edge of my seat. Some of that credit can probably go to the audio book narrator Tavia Gilbert, who did a fantastic job of acting her dialogue instead of simply reciting it.
The Woman’s Hour is well researched, well written, and worth checking out for readers interested in a pivotal moment in American history.
Posted by BPL Ref at 2:15 PM