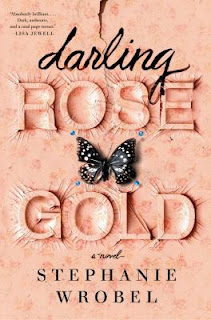 After five years in prison, Patty is finally being released. She served time for purposefully poisoning her daughter Rose Gold and making her sick until she was a malnourished teenager with hair loss and rotten teeth. Though Patty maintains her innocence, she’s looking forward to making amends with her daughter and starting fresh. She can forgive Rose Gold for taking the stand and testifying against her during her trial. Rose Gold has even graciously agreed to not only pick up Patty on the day she’s released but to also take her in. For a little while anyway.  But Patty is hoping for a long term arrangement.
Darling Rose Gold is told in duel perspectives. The narration alternates between Rose Gold in the years after her mother is convicted and Patty present day. This really worked for the story because though we get to know Rose Gold in the past, we don’t really know her or her motivations in the present day. We can only go by what Patty observes and how she interprets those observations. Being inside Patty’s head was fascinating. She absolutely loves playing the martyr and self-sacrificing mother. But when Rose Gold doesn’t respond in a way she likes, we can see Patty’s mask slip a little bit, and it is unsettling.
Rose Gold, while more sympathetic, also has her unlikable moments. She desperately wants friends and a family and to not be taken advantage of. But making connections is harder than she anticipated. When reality doesn’t meet her expectations, a rage builds inside of her that she doesn’t know how to control. As these two timelines start to converge, the tension ratchets up.
I’ve seen a couple of books that have clearly been inspired by the real life story of Gypsy Rose Blanchard whose mother convinced everyone she knew that her daughter was gravely ill, including Gypsy herself. Wrobel mentions in her afterward how she read about Gypsy’s story but I really appreciate all the ways she diverged from that inspiration. This book is a heartbreaking yet easy read that is even darkly funny at times. I believe this is the author’s first novel, and I’m excited to see where she goes from here.

**I received a copy of this book from Netgalley in exchange for an honest review.**
Posted by BPL Ref at 10:29 AM