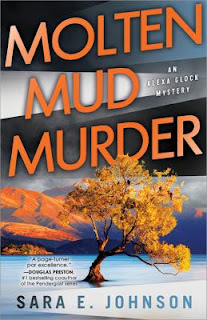 American forensic odontology expert Alexa Glock has been working in Auckland, New Zealand for six months. She wants to stay longer except that her fellowship is up, and her visa is only good as long as she is employed.  When she spots a news item about a body being found in “molten mud,” she seizes on it as a possible way to extend her stay. After all, teeth are her specialty and the heat from the geothermal activity would have left much of the soft tissue unrecognizable.

Luckily for Alexa, the local person who would normally have been called in to investigate isn’t available, so she becomes a temporary consultant.  Alexa was in the area to attend the funeral of a friend, a Maori, so she has some vague knowledge of native customs and beliefs, but she still doesn’t have a strong grasp of New Zealand politics and procedures.  She keeps bumping up against the differences in the chain of command in a police investigation, creating some tension between her and her new temporary co-workers, and of course she can’t really grasp some of the nuances of the culture clash between the European ruling population and the indigenous peoples.

Determinedly, Alexa pursues her own lines of inquiry, something that irks some of her co-workers.  She is attracted to Detective Inspector Bruce Horne, but keeps reminding herself that he is married. He is patient with the Yank, but tries to set boundaries. In the meantime, it begins to look as if the murder was a part of something much bigger, including trespass on sacred lands, which strains Maori and European relations and puts Alexa in an uncomfortable position between her new friends and her job. Then an incident makes it apparent that whoever killed the first victim is keeping tabs on the investigation and might be willing to kill again.

Since I like books which teach me things, I thoroughly enjoyed this mystery.  Alexa is from North Carolina, and has a bit of a mysterious backstory woven through the book.  She’s an interesting character; smart, defensive, and stubborn.  She is also a keen observer of her surroundings.  I liked reading about the culture, both European and Maori, as well as the surroundings: the geothermal areas in Rotorua are fascinating and inspired a few online searches, one of which turned up video of boiling mud—definitely something I would avoid!

This is a first novel, but I expect more in the series.  Like her protagonist, Sara E. Johnson lives in North Carolina but she and her husband lived in New Zealand for a year.
Posted by BPL Ref at 8:43 AM