About Alice by Calvin Trillin 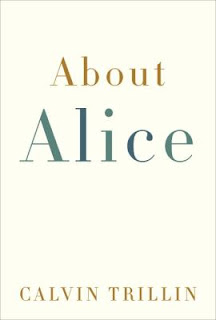 Reviewed by Jeanne
I had been reading and enjoying Calvin Trillin’s essays for years before his wife, Alice, passed away.  It came as a shock, in that odd way that happens when you “know” someone through television or writing, that strange intimacy that creates a false relationship.  It was as if a friend had died.  Apparently others felt the same way, as Mr. Trillin writes of the notes that started “I never knew Alice but…”  He said Alice would certainly have agreed with the first part, as she felt his portrayals made her seem like “a dietician in sensible shoes.”  The Alice in his writing is his view of Alice, the woman with whom he fell in love at first sight and pursued until, to his astonishment, she agreed to be his wife.

In this slim volume of essays, Trillin tells us of that meeting, of their marriage, and of Alice’s illnesses. A non-smoker, she was diagnosed with lung cancer when her daughters were small.  She endured the treatments because she was determined to see her girls grow up.  Along the way, she made a difference by her writing, her teaching, and her example. Theirs was an extraordinary relationship.  Early on, Trillin is warned by a fellow writer to never let Alice read any of his manuscripts because she would give him an honest opinion.  Trillin told him it was too late for that: if he could write without Alice, he would.

As always, Trillin’s writing is graceful and gently humorous. Alice does have her faults—for example, if there is a subject to be avoided in a conversation, she will hone in on it immediately and bring it up—but mostly this is a wistful, admiring remembrance of a woman I didn’t know, but wish I had. It’s a sweet, funny, loving tribute to a beautiful woman, and a generous gift to readers.
Posted by BPL Ref at 8:54 AM