The American Plate: A Culinary History in 100 Bites by Libby H. O’Connell 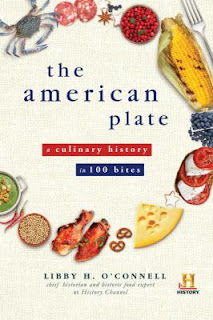 In The American Plate, Libby H. O’Connell travels throughout America’s history to tell our story with food. While the “bites” aren’t always literal (she covers canned foods and Coca Cola among other things), she helps paint a picture of how our eating habits and taste buds evolved throughout the centuries.
O’Connell begins with the most important foods to the Native Americans: corn, beans, and squash – which were referred to as the Three Sisters. These hearty foods created the foundation for their diet. It may be no surprise that corn makes multiple appearances in our history. Whether she’s discussing the first mass produced snack in the United States (Cracker Jacks) or why Heinz uses the number 57 (they just liked that number!), O’Connell’s history book is an absolute delight. It is filled with fun facts sprinkled throughout as well as actual, significant history. She attempts to link the foods of an era with major historical events to varying degrees of success. I can easily see the link in including peanut butter when discussing the Great Depression because it was cheap and nutritious with protein and healthy fats. Naturally, moms loved it and so did kids. (And peanut butter sandwiches have never gone out of style.) But including a section on quiche because it was served at meetings during the Second Wave Feminist movement? Eh, seems like a stretch. The author even admits as much.
But that’s a minor quibble. I loved learning the backstory of certain foods, especially as we moved into the 1950s and more commercial food products. (Yes, Jell-O is included!) And while I may have tuned out a little bit during the wine section, I immediately perked up during the following section on cheese. The fact that over 100 different foods are discussed keeps it fast-paced and interesting. O’Connell also includes a few recipes readers can try out for themselves. I’m not particularly interested in making roasted beaver tail but a recipe for oatmeal cookies sounds simple enough. And it has ties to the suffrage movement! Since 2020 is the centennial of the ratification of the 19th amendment, it felt appropriate to share here.

Oatmeal Lace Cookies
This recipe is similar to directions found in the suffrage cookbooks sold to raise money for the cause.
· 1 cup light brown sugar
· ½ cup butter (1 stick)
· 1 egg, lightly beaten
· ½ teaspoon vanilla
· 2 tablespoons all-purpose flour
· ¼ teaspoon baking powder
· ¼ teaspoon salt
· 1 cup oatmeal (not instant)
Preheat oven to 350°F. Mix the sugar and butter; cream well. Add the egg and vanilla. Mix the flour, baking powder, salt, and oatmeal in a separate bowl, and stir into the butter mixture, making sure all ingredients are well combined. Cover a cookie sheet with parchment paper or aluminum foil. Drop ½ tablespoon of batter per cookie onto the sheet. Leave plenty of room between cookies because they spread a lot. Bake 8 minutes; edges should be brown. Slice cookies apart, if necessary, while they are still warm on the cookie sheet. Cool well before removing cookies from foil. They should be thin, crispy, and delicious. Store in tins, which you can bring to the election booths and share with your fellow voters.