Bryant and May: Hall of Mirrors by Christopher Fowler 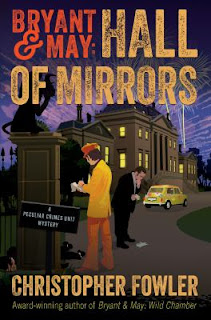 I have read and enjoyed several of the previous entries in the Peculiar Crimes Unit series which chronicles the adventures and misadventures of a motley group of police investigators based in London.  While highly unorthodox and definitely non-regulation, they manage to solve some of the oddest mysteries the city can offer.

This entry, however, is a bit of an anomaly.  For one thing, it’s set in the past—1969, to be exact—when senior sleuths Arthur Bryant and John May are somewhat less senior. For another, they have to venture out of London. Their assignment is to take care of Monty Hatton-Jones, a whistleblower who is scheduled to testify against a developer accused of using shoddy materials. Instead of hiding out in a motel room like a good snitch, Monty insists on attending a house party at Tavistock Hall hosted by Lady Banks-Marion and her son, Harry aka Lord Banks-Marion.  The house is to be sold to reclusive millionaire Donald Burke, who will also be attending the party. With no other choice, Bryant and May pack their suitcases and head to the wilds of Tavistock Hall.

It soon becomes apparent that there is something sinister going on, and a murder to be solved amid the secret passageways, valuable art, falling masonry, half-naked hippies, and sometimes fatal farm equipment.

As with all of the PCU books, the serious plot is thoroughly laced with humor. Bryant and May are pretending, somewhat unsuccessfully, to be business colleagues of Monty’s. Bryant is always a bit of a fish out of water, only happy with his books and . . . um. . . eclectic friends.  This time he’s positively gasping for air, preferably smog-filled.  The country does not agree with him, what with its positively primitive conditions (no sidewalks, animals about, unnerving birdsong).  He’s tried to fit in, borrowing clothing more suitable for an English country house; unfortunately, aforementioned clothing comes from his friends in the theatre, who have given him used costumes from various productions, including tap shoes.

I will admit to being a bit disappointed at the lack of arcane lore in this one—learning about the history of London (and England) is usually a highlight for me.  It isn’t until near the end of the book that Bryant retreats to the library to research. However, I also love the sociological commentary the books present, and this one was also kind of a trip down memory lane.  Lord Banks-Marion has been living in India, inspired by the Beatles’ spiritual pilgrimage, and has set up his own commune on the property. I also missed some of the supporting characters who populate the (more or less) present day adventures.

Still, if clever plots, witty observations, interesting characters, and droll social commentary are your thing, you’ll find much to like in this book. And if you like the 1960s, all the better!
Posted by BPL Ref at 11:25 AM