The Spook in the Stacks: A Lighthouse Library Mystery by Eva Gates 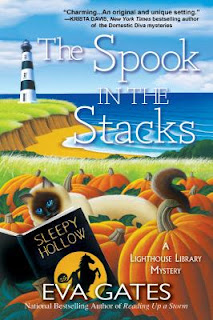 Lucy Richardson loves her job at the Bodie Island Lighthouse Library, a real repurposed lighthouse.  Lucy even has an upstairs apartment she shares with Charles, a charming and regal Himalayan cat, making this an ideal job.  Even more exciting is the prospect of having an important local history collection donated to the library, complete with funds for building a climate-controlled storage/ research area. It’s not a done deal, however, and a nearby college library is also in the running for the offer. When the potential donor is found murdered, Lucy is determined to clear the library’s reputation as well as save a new friend from a murder charge.

This fourth book in the series is enlivened by the Halloween setting, somewhat appalling to Lucy who is no fan of skeletons, fake spider webs, or bats.  Lucy’s arch-rival takes the opportunity to retell (and embellish) local ghost stories, especially those featuring the lighthouse, much to Lucy’s dismay. Also, the book club is reading and discussing some of Washington Irving’s work. I’m a sucker for a good book discussion, and it made me want to re-read The Legend of Sleepy Hollow.

While the mystery is competently handled, it’s the characters that really catch my attention.  There’s book collector Theodore, with his fake British accent and bow ties, the irritating Louisa Jane, and the indispensable Ronald, the children’s librarian with a flair for the theatrical.  The North Carolina setting is also a plus, and I found it great fun to imagine living in a lighthouse library.  (A bit mindboggling as to how they fit a children’s area, book stacks, archives, etc. in a lighthouse, but I decided it’s like Dr. Who’s Tardis:  much bigger on the inside.)  A bit of romance rounds out the story.

If you’re looking for a good cozy mystery, this series might just fit the bill.

Note:  Eva Gates is a pseudonym for Vicki Delany who writes several other mystery series under her own name, including the Sherlock Holmes Bookshop Mysteries.

You can see pictures of the real lighthouse here: Bodie Island Lighthouse.
Posted by BPL Ref at 11:53 AM