The Age of Miracles by Karen Thompson Walker 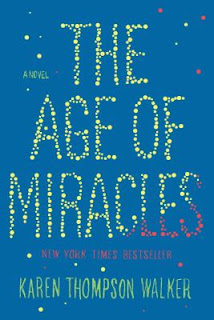 Julia is growing up in a strange time. She is eleven going on twelve when the rotation of the earth begins to slow. Gravity starts to feel just a little different; balls thrown lag just a bit and birds drop from the sky. In her suburban California neighborhood, Julia tries to go about her days—going to school, talking to her best friend Hanna, kicking the soccer ball at team practice. But as the rotation of the earth slows, the length of the bright days grows, as well as the length of the dark, dark nights.

As days grow by minutes and then by hours, people begin to worry about the effects on crops, animals, and ultimately the human race. Economists and governments debate how humanity should handle the slowing.  Some think that the 24-hour clock should be followed, no matter if the sun rises as people are getting ready for bed. Some think that humans should allow their circadian rhythms to guide them by waking with the sun and resting during the dark. Meanwhile, Julia is just trying to navigate middle school.

The story is told from some point in the future, presumably by an adult Julia who has come through this great and terrible time of changes. I quickly became lost in the story of eleven-year-old Julia as she and her family and friends adapt to the changes brought about by the slowing. Walker’s writing is beautifully drawn, bringing Julia’s slowing world to life.

Certain phrases brought me up short, reminding me that the disruption of Julia’s world was more than just an inconvenience. People faced major changes whether they chose to follow “clock time” or “real time” with the rising and falling of the sun. One line that sticks with me is, “…they were the last pineapples we’d ever eat in our lives.” Another is, “Sometimes the saddest stories take the fewest words: I never heard from (a friend) again.”

Walker has published only two books, The Age of Miracles in 2012 and The Dreamers in 2019. I have enjoyed her lyrical prose so much that I don’t know if I can wait another seven years for more. However, great masterpieces can’t be rushed, so I will bide my time and keep Karen Thompson Walker on my watch list.
Posted by BPL Ref at 9:15 AM