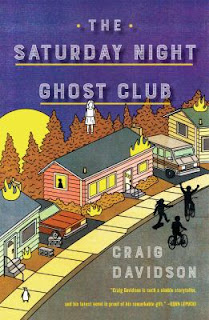 Growing up in the 1980s in Niagara Falls, lonely 12-year-old Jake spends most of his time with his eccentric uncle Calvin discussing urban legends and local ghost stories. When Billy Yellowbird and his sister Dove roll into town, Jake finally starts to make real friends. Calvin decides to initiate them all into a weekly ghost hunting crew that he dubs The Saturday Night Ghost Club.

On the surface this has everything I like in books: the 1980s, ghost stories, and later on even some family secrets. But for whatever reason I just didn’t love this book. It’s not bad by any means. It’s…fine. It starts off pretty promising, to be honest. A light-hearted summer romp that is fun and breezy to read. It takes some dark turns, however, which I don’t have a problem with normally except in this case, I don’t think the shift in tone is successful. It does make sense that in a “coming of age” story our protagonist would finally see the world as it really is and not as he was seeing it as a child. I get that. But it didn’t work for me.

I wonder if I had felt more connected to the characters would the dark turn have made more of an impact. Jake is a chubby loner (I don’t think we’re even told he’s chubby until near the end of the book), Calvin is eccentric, Dove (the only girl in the group) has mental health problems but those are never expanded on, and Billy is…Billy. We don’t really get any defining characteristics for him, besides being Jake’s friend. Besides these surface-level descriptors, there’s just not a lot of depth to these characters.

Davidson’s novel is not terrible; I think there is a foundation in here for a wonderful book. However, the execution does fall a little flat.
Posted by BPL Ref at 9:27 AM