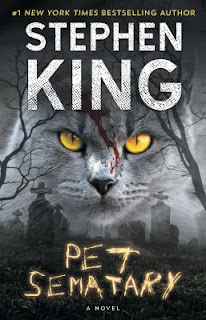 Reviewed by Christy
“The book was better than the movie," as the saying goes. Although I am sure there are plenty, I’m having a hard time thinking of a better example than Pet Sematary by Stephen King. Though I enjoyed the movie, both the 1989 version as well as the 2019 remake, the 1983 novel is richer and even more upsetting.
After accepting a job as director of a university’s health service, Louis Creed moves to Maine with his wife Rachel and their two children, Ellie and Gage. Louis becomes quick friends with their elderly neighbor Jud after Jud offers some advice on treating a bee sting suffered by their young son. Jud also cautions them about the busy road in front of their house and how dangerous it is, especially for pets.
After a couple of months in their new home, the Creed family gets settled in and develops a routine. Louis is particularly fond of his nightly chats and shared beers with Jud. When Rachel visits her parents for Thanksgiving with the children in tow, Louis stays behind due to his tense relationship with his in-laws and spends the holiday with Jud and his wife. The cozy camaraderie is cut short, however, with Ellie’s cat is run over by a tractor trailer. Jud, knowing how much Ellie loved her cat and how inconsolable she would be over his death, introduces Louis to the pet cemetery behind his house. Once used as an ancient burial ground for the Mi’kmaq tribe, Jud later admits that the native people stopped using that particular land because the “ground is sour.” Louis witnesses this first hand when Ellie’s cat returns from the dead not quite right.
To say too much more would spoil the story if you’ve managed to miss either movie. But it is dark, tragic, and enthralling. In Jud’s attempt to perform an act of kindness, he unleashes a series of events that lead to devastating horror. The friendship and bond between Louis and Jud is essential to the story (as evidenced by the book’s first line: “Louis Creed […] never expected to find a father as he entered his middle age, but that was exactly what happened.”), but this aspect is disappointingly light in both movies. It honestly took me a little bit to warm up to Louis but he won me over eventually. His relationship with his wife and children are cute and sweet which makes the book all the more horrific. I listened to this in audio form and the actor Michael C. Hall (Dexter) did a wonderful job narrating, especially as Jud. Though I’ve only read a handful of King novels, I think so far this one is my favorite. I would recommend this to any horror fan, even if you’ve already seen the movie and think you know the whole story.
Posted by BPL Ref at 1:01 PM