The Library of Lost and Found by Phaedra Patrick 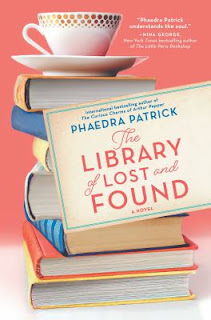 Martha Storm is a volunteer librarian—actually, she’s a volunteer everything whether she wants to be or not.  She’s just one of those people who ends up being a doormat for others.  She was the one who looked after her parents, Thomas and Betty, until they died, while younger sister Lilian married and began a family.  Martha is the one who ends up doing laundry, altering clothes, storing costumes, and even trying to repair a papier-mache dragon’s head.  She’s always been the one people depended on but never seemed to appreciate.

Except for Joe, whom she had hoped to marry before her parents became ill; and Zelda, her mother’s mother, who encouraged her to do outrageous things that incurred her father’s wrath.  But Joe moved to America, and Zelda died long ago, so now all Martha has is her place at the library and a house packed to the brim with things: her parents’ things, her sister’s things, all the stuff that people want to keep but not at their houses.

Then one day, Martha finds a package addressed to her.  Inside is a coverless book of fairy tales with an inscription to Martha from Zelda, dated 1985.

I admit I was put off a bit at first because not only was Martha downtrodden, but the flashbacks to her childhood made me dislike her father intensely.  He was incredibly controlling, keeping a tight rein on the purse strings, his daughters’ reading (disdaining fiction, fairy tales, and everything creative), and generally kept everyone under his thumb—except for Zelda, which is exactly why he and Zelda clashed so fiercely.

However, I felt sorry for Martha and thought I owed it to her to see her through. Surely, things have to look up for this poor woman!

I’m glad I did, and was able to see her rise to the occasion over and over again. It was good to see her gradually realize that she had intrinsic worth, that she wasn’t defined only by ways that she could help others.  I also met vivid characters—Suki with her malapropisms, ah-mazing Zelda, stoic Siegfried, and even rigid Thomas-- and explored a tangle of family secrets.  There was young love, mature commitment, and a woman learning that she can break free from the past and her own insecurities.  I may still not approve of Betty’s choices, but I understood them a bit by the end, and I closed the book satisfied.  I liked how the author used the fairy tales to illuminate situations and characters, and how skillfully she wove the strands of the story together.  Of course, all the book titles and authors that were dropped into the story delighted me.

This is a charming tale and I look forward to reading more from Patrick.
Posted by BPL Ref at 9:12 AM