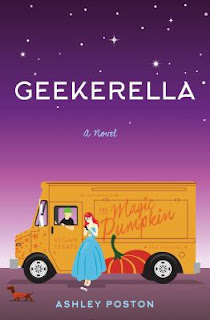 Elle Wittimer is dying to return to ExcelsiCon.  She’s been saving tips from her part-time job at the Magic Pumpkin food truck and building an excellent costume for this year’s Cosplay Ball.  Despite her stepmother’s attempts to dampen her dreams and destroy her love of Starfield, a TV show both she and her father treasured, Elle is determined to go to ExcelsiCon—after all, it’s the convention her father helped build and her last remaining connection to him.

Darien Freeman, on the other hand, is wondering how he can get out of going to ExcelsiCon.  He loves Starfield and he used to love going to conventions, but, since acquiring the lead role in the reboot of Starfield, most diehard fans have dismissed him as just another pretty face.  But one message to the wrong number will change his life forever and put him on course to meet a girl with a love for Starfield to match his own.

Geekerella by Ashley Poston is, of course, another retelling of Cinderella; however, I found it to be one of the more enjoyable ones I’ve read.  I love Cinderella stories anyway and I enjoy seeing how authors manage to tweak the staid Cinderella story in new, surprising ways.  In particular, I enjoyed Geekerella because it’s one of those retellings where the heroine does the unexpected:  she saves herself.

I always love a good story where the main female character has plans, where she’s working to save herself—where she has dreams beyond finding Prince Charming.  I genuinely liked Elle and I appreciated her as a character.  She was someone who had hopes and fears and dreams and, like all people, she makes mistakes.  Likewise, I liked that she wasn’t going to let anyone—not even her Stepmonster, as she’s appropriately named—stand in her way.

Speaking of the Stepmonster, I really disliked her.  She’s manipulative, controlling, and, sometimes, she’s just plain cruel.  It didn’t take much for my dislike to turn to immediate hate.  The Stepmonster—and her daughter—are not likeable characters.  I know they’re not supposed to be, but I really thought there might be something else there that would define them.

Overall, I really liked Geekerella.  It’s sometimes difficult to read, simply because the Stepmonster and Elle’s stepsister are so very horrible; however, it’s a fun, romantic and nerdy read.  I liked the friendships Elle builds along the way, and I even liked Darien.  It was interesting to see how their lives intersected and how their shared adoration of Starfield becomes the focal point of their budding relationship.

It's a lovely little story and well worth reading if you love a good fairytale retelling.
Posted by BPL Ref at 12:06 PM