The Book Artist by Mark Pryor 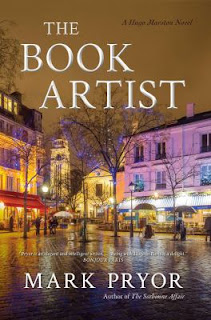 Bibliophile and ex-FBI profiler Hugo Marston usually finds his job as head of security for the U.S. Embassy in Paris to be interesting and challenging, but there are some duties he finds rather tedious. Escorting the Ambassador to an American artist’s exhibition at the Dali Museum should make for a fairly boring evening but Hugo is intrigued when he finds that the artist’s medium is books.  He’s even more intrigued when he meets the artist herself and finds her to be young and charming as well as talented.  Unfortunately, the gala opening is marred by a murder, and one of Hugo’s friends stands accused. It’s going to take a lot of sleuthing as well as diplomacy for Hugo to find a solution.

There is a second strong plot concerning Marston’s best friend, the rough and often profane Tom Green, who is on the trail of a man named Cofer who holds a grudge against both Green and Marston.  Cofer has just been released from prison and is headed to Europe, and his intentions aren’t good.  Tom is determined to find him before he can carry out whatever nasty little plan he has.

This is the eighth and latest in the series of Hugo Marston books.  For me, they work well as standalones, Hugo is one of the good guys; he’s not overbearing or condescending, even when he feels someone is in the wrong.  He is also very good at his job.  I like the way he works with the French authorities, and how he treats people in general.

I have mixed feelings about the competing plotlines.  Both were well done, but it seemed almost an embarrassment of riches. The primary one is more mystery, follow the clues and find the murderer type, while the second is more like a thriller. Each could have carried its own book, and the second one could have been fleshed out more, but those are minor points.

Pryor does a good job of giving the reader a sense of Paris the city, the people, and especially the food.  I am still not convinced that I want to eat snails, however. The descriptions of the book sculptures were well done; I wished I could have seen them! While there can be some thriller elements, for the most part these are straight on mysteries, which I like.  I was especially interested in a solution in this book which involves how DNA could be transferred.  I won’t say more, but it was ingenious.
Posted by BPL Ref at 2:11 PM